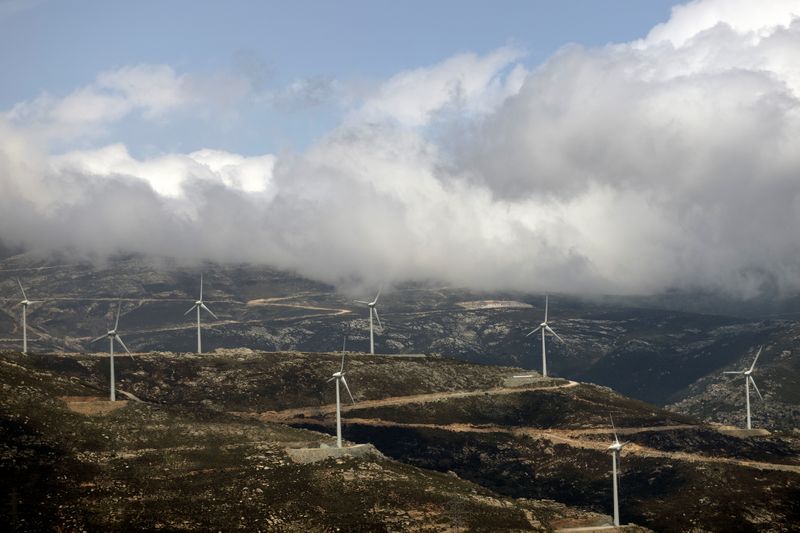 © Reuters. FILE PHOTO: Wind turbines are seen on a mountain near the town of Karystos, on the island of Evia, Greece, April 16, 2021. REUTERS/Alkis Konstantinidis

STRASBOURG (Reuters) – The European Union on Wednesday pledged to increase financial support to help poorer countries fight climate change and adapt to its impacts, and called on the United States also to step up.

“We will now propose an additional 4 billion euros for climate finance until 2027,” European Commission President Ursula von der Leyen said in a policy speech at the European Parliament in Strasbourg.

“But we expect the United States and our partners to step up too. This is vital, because closing the climate finance gap together, the U.S. and the European Union, would be such a strong signal for global climate leadership,” she said.

Climate finance is expected to be a decisive issue at the United Nations’ COP26 summit in November, where world leaders will attempt to unlock commitments to cut emissions faster and stave off catastrophic climate change.

With seven weeks to go until COP26, finance remains a sore point.

Rich countries have so far failed to deliver their 2009 pledge to provide $100 billion per year in climate finance to poorer countries by 2020.

Without that support, some developing nations say they cannot make the huge investments required to wean their economies off fossil fuels and onto clean energy, or bolster their infrastructure to cope with worsening storms, floods and rising sea levels.

The European Union and its member countries are, taken together, the biggest provider of climate finance to developing countries, according to the OECD.