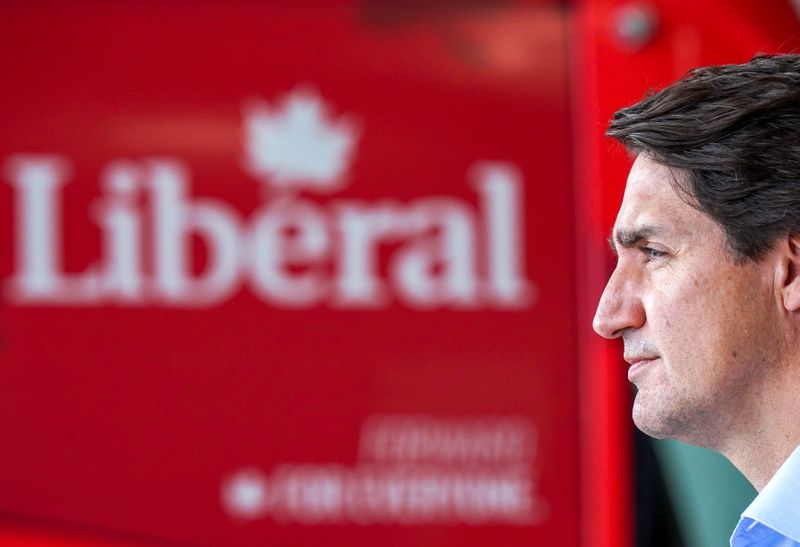 MONTREAL (Reuters) – Canada’s Liberal Prime Minister Justin Trudeau finds himself behind in polls ahead of a snap election he called hoping his management of the COVID-19 crisis would propel him to victory.

Trudeau called the Sept. 20 election last month, two years ahead of schedule. At the time, his Liberals were well ahead and looked likely to regain the majority in parliament they lost in 2019. His main rival, Conservative leader Erin O’Toole, has repeatedly attacked him for calling a vote during the pandemic.

The latest polls by Nanos, Ekos and others show Liberal fortunes have faded as voters have grown fatigued with Trudeau, 49, who has been in power since 2015. One Liberal strategist said on Friday the early-vote call had backfired as it was seen as “wrong” and “greedy” by electors.

Also on Friday, Canadian health officials released modeling showing new COVID-19 cases could surpass the peak of the third wave within the month, and warned that if vaccinations among young adults do not ramp up, the country’s hospital capacity may be exceeded.

If these numbers hold up on election day, O’Toole would most likely win a minority administration. (See profiles of party leaders:) On Thursday, the Conservative leader came out of a French-language leaders’ debate https://www.reuters.com/article/us-canada-election-debate/canadas-trudeau-on-defensive-over-election-call-few-big-blows-landed-at-first-debate-idUSKBN2FZ01N without suffering much damage.

During the exchanges, Trudeau said that if there were to be another minority government, there would most likely be another election in 18 months.

“We should not be in a campaign. Only Mr. Trudeau wanted this campaign for his own personal interests,” O’Toole told reporters on Friday.

“And last night, he threatened another election if he doesn’t get his way with this one. Canadians deserve better than that,” he said after a campaign announcement in Montreal.

On Friday, Trudeau said his debate comments referred to the average duration of minority governments. He then attacked O’Toole’s opposition https://www.reuters.com/world/americas/canadas-pandemic-election-unvaccinated-candidates-are-knocking-doors-2021-08-23 to vaccine mandates for domestic travel, saying the Conservative policy would put people in danger.

“Without strong leadership on vaccines, our kids won’t be safe in the classroom, our businesses won’t grow and thrive, and all Canadians will be at risk,” Trudeau said.

On Friday, Canadian health officials said there is an “urgent need” to ramp up vaccinations for 18- to 39-year-olds, who lag the rest of the population. They also said masking and social distancing must continue into the winter to prevent further spread.

Some 77% of eligible Canadians are fully vaccinated.

During the last two election campaigns, Trudeau won crucial support late by telling Canadians a vote for the New Democrats – who compete for the same left-leaning segment of the electorate – would split progressives resulting in a Conservative government.