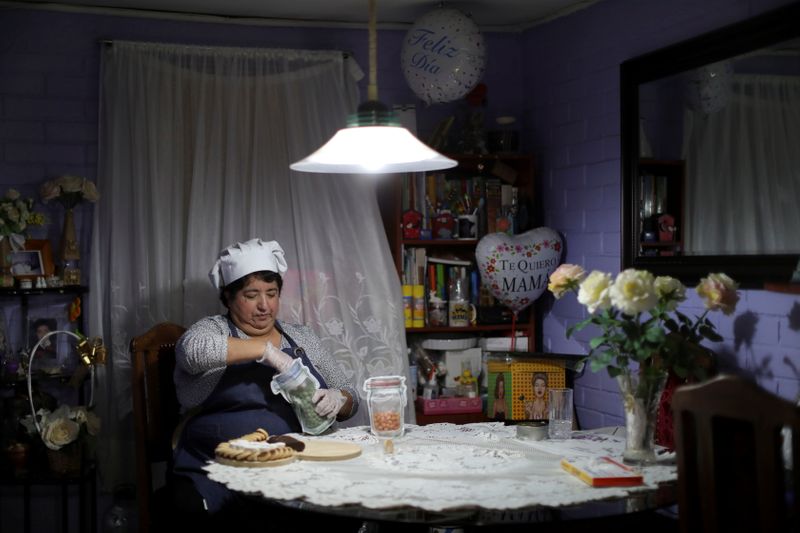 © Reuters. Rosa Navarro, 52, makes a tray with the breakfast she prepares to sell, after the coronavirus disease (COVID-19) restrictions affected her work, in Santiago, Chile September 7, 2021. Latin America’s mothers are lagging behind in the pandemic of economic r

BUENOS AIRES/ASUNCION/SANTIAGO (Reuters) – Latin America’s mothers are falling behind in the pandemic economic rebound, returning to the labor force more slowly than men in a trend experts say could set back female workforce participation by a decade.

Behind the trend: women more often work in sectors most impacted by the pandemic, including tourism, commerce and education. Entrenched gender imbalances also has meant women have faced the lion’s share of unpaid domestic work and care-giving, sharpened by lengthy school closures in the region.

“We are seeing that in a disproportionate way those (domestic) demands are being attended by women,” Luis Felipe Lopez-Calva, UNDP Director for Latin America and the Caribbean told Reuters.

While women overall have been impacted, there are some key differences between groups. Mothers in two-parent households are the least likely to return to work outside the home, while single mothers – though hit hard initially – have seen a sharper rebound in employment and labor participation.

“It was not easy to find work in the pandemic,” said Barbara Temperley, a Buenos Aires business administration graduate with two children aged 9 and 12, adding her guess was that employers were worried about the impact of care tasks on female hires.

“Things did not return to how we were before the pandemic.”

In nearby Paraguay, Rosa Maidana, a 45-year-old mother of three children, cited long school closures, which meant many kids are unlikely to have in-person classes until early next year. She was driving a school bus before the virus spread.

“Everything changed with the pandemic. I had my vehicle and I kept doing it until there were no more classes. Then I stayed home with my kids, who have virtual classes every day, and now we depend on my husband’s work,” she said.

The UNDP report showed the single mothers had been affected in terms of unemployment and labor force participation, but are now actually bouncing back further in the recovery – partly out of necessity to get back a living wage.

“There was no option not to work, something had to be done,” said Rosa Navarro, a 52-year-old Chilean with seven grown children, who had to reinvent her events business with 20-member staff to selling breakfasts and lunches when tough restrictions came into effect.

“I am single, I do not have a husband to help me. My children give me a hand, but we were very affected,” she added.

According to the UNDP, in Latin America, where only 40% of women participate in the labor market, 39% of households are headed by a woman and 26% are single-parent households where the head is a woman. The study was done based on household surveys from Argentina, Bolivia, Chile, Mexico, Paraguay and Uruguay.