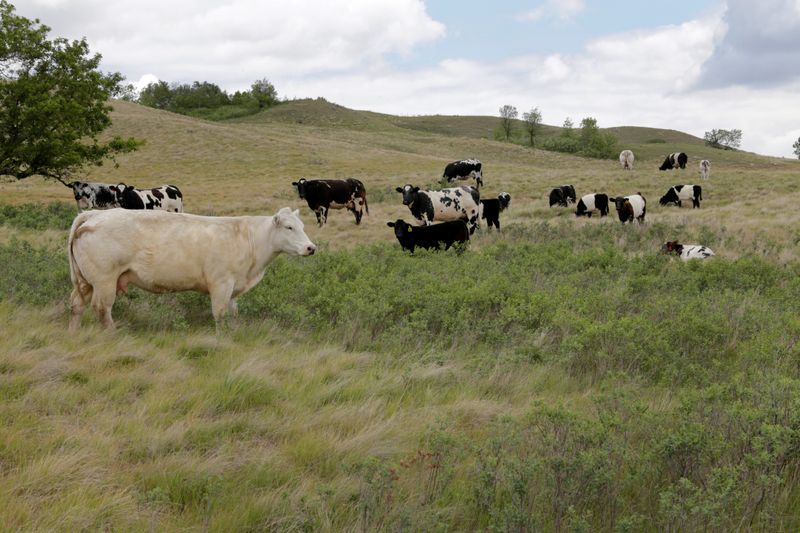 
By Rod Nickel and Tom Polansek

Record-setting heat and sparse rain left Riding with too little grass or hay to feed her cattle near Lake Francis, Manitoba. She sold 51 head at auction in July, about 40% of her herd. The sales included 20 heifers, young cows that have not given birth, that were potential breeding stock.

“That’s your future. As my herd goes down, so does my income,” Riding said. “It’s gut-wrenching.”

Such liquidations of breeding stock are expected to limit cattle production in the coming years, tightening North America’s beef supply and driving up consumer prices, according to two dozen ranchers and cattle experts.

The drought spanning much of western North America – from western Canada to California and Mexico – has cooked pastures and hay crops that fatten cattle. The ranchers’ plight is one impact of many from the punishing drought, which has also damaged wheat across North Dakota and cherries in Washington state, weakened bee colonies, and forced California to shut a major hydroelectric plant. In British Columbia, an entire town burned, while California is expected to see a record number of acres go up in flames this year.

Climate scientists say global warming makes extreme heat and drought occur more frequently, but some ranchers interviewed by Reuters dispute the link to climate change. They view the current drought as an unremarkable shift in the weather from which the industry will recover.

Riding said she is tired of scientists blaming agriculture, among other industries, for climate-warming greenhouse gas emissions.

“I know climate change is our latest buzzword, but I think this is a cycle,” said Riding, 60, whose farm northwest of Winnipeg sits in one of hardest-hit drought areas. “Sometimes the cycles are longer than normal.”

Gloria Montaño Greene, a U.S. Department of Agriculture official who works to reduce risks to farming, said the connection between the West Coast drought and climate change is clear. “There is an increase in heat. We’re seeing various wildfires,” she said. “We’re seeing climate change.”

Adding to ranchers’ problems, prices of feed alternatives such as corn, soy and wheat are the highest in years. There is so little feed available that Manitoba farmers have bought 280 tons of hay from as far away as Prince Edward Island, some 3,400 kms (2,000 miles) to the east.

In a normal year, 10% to 12% of breeding stock in western Canada, the country’s top beef-producing region, are culled due to age or other routine reasons, and farmers replace most of it, said Brian Perillat, senior analyst at CanFax.

This year, ranchers are likely to cull 20% to 30%, reducing the size of herds, according to industry group Alberta Beef Producers. That would be an unprecedented reduction of the breeding stock, based on records going back to 1970, Perillat said.

In the United States, the world’s third-biggest beef exporter, analysts expect a smaller impact because the herd is more spread out. Still, a third of U.S. cattle are in drought areas, according to the U.S. Drought Monitor, and producers are making the painful decision to send animals to slaughter early.

New Mexico rancher Pat Boone, 67, slashed his herd of mother cows by half, to about 200 head, over the past year.

“Our land is hurt, and it’s hurt badly,” said Boone, who lives in Elida, a town of about 200 people in eastern New Mexico. “We’re not going to be in any hurry to restock.”

Sending female cows to slaughter in 2021, instead of keeping them for breeding, will reduce market-ready cattle inventories in 2023, economists say. The animals have long gestation periods and take time to fatten after birth.

“When we liquidate cow herds, these supply impacts last years,” said Mike von Massow, associate professor of food, agricultural and resource economics at University of Guelph, Ontario. “You have this hangover.”

Tyson Foods (NYSE:), the biggest U.S. meat company by sales, said in a recent earnings call it expects operating margins for its booming beef business to decline next year amid herd liquidation, though results should still be strong.

Riding says she will need four years to rebuild her herd. If the drought abates, she might retain or buy heifers next year, but the animals don’t produce their first calf until they turn two years old.

Consumers will also feel the pinch, analysts said. The USDA in August trimmed its estimates for U.S. beef production this year and next as ranchers are raising animals to lighter weights.

After a 2014 drought, beef prices in Canada rose about 25% over the following year, and stayed elevated for at least two years, von Massow said, citing Statistics Canada data. Beef prices are likely to increase as early as this fall, reflecting the higher prices to feed cattle, he said.

In Mexico, the northern state of Chihuahua has gone from around 1.2 million breeding cows in 2019, to about 700,000 because of drought, said Fernando Cadena, head of Mexican ranching company Carnes Ribe based in Ciudad de Chihuahua, just south of Texas.

Cadena said other major northern Mexican ranching states like Sonora, Coahuila, Nuevo Leon and Durango, saw similar rates of drought-induced slaughter, in addition to cows that died on parched land due to lack of food or water.

The hardest hit ranchers in northern Mexico will likely need two to four years to recover herd levels, he said.

Fewer cows in Mexico could impact the U.S. beef supply, as more than a million cows are imported across the southern border each year.

“We’ll just have to wait for the pasture land to recover,” Cadena said. “For months, it just didn’t rain. There wasn’t anywhere for the cows to graze.”

Feedlots, which buy cattle from ranchers and fatten them for slaughter, are also worried about their businesses. Greg Schmidt, who feeds 15,000 cattle near Barrhead, Alberta, expects to pay more for available cattle next year after herds are reduced.

“This is going to ripple through our industry for years,” said Schmidt, chair of the Alberta Cattle Feeders’ Association.

Steve Arnold, a rancher in Pozo, California, said 12 of the last 15 years have brought less than half of normal rainfall to his area about 200 miles northwest of Los Angeles. But Arnold, 67, said this drought is the worst he has seen. Grass never grew this year due to the lack of rainfall, Arnold said. He has reduced his herd about 30% to about 70 head.

“We’ve had dry stuff but not like this,” he said.

Ponds that used to provide drinking water for cattle are dried up in parts of California, said Tony Toso, 58, who raises cows and calves in the foothills of the Sierra Nevada mountains.

“I’m seeing ponds that usually may get low, but not where they’re cracked dirt,” said Toso, president of the California Cattlemen’s Association. “There’s nothing in them.”

The rancher said he did not retain any calves to replace his herd of mother cows as he normally would because of the drought and outlook for limited feed. Instead, the animals all went to market to be slaughtered for beef.

“We’re just kind of hunkering down,” he said.