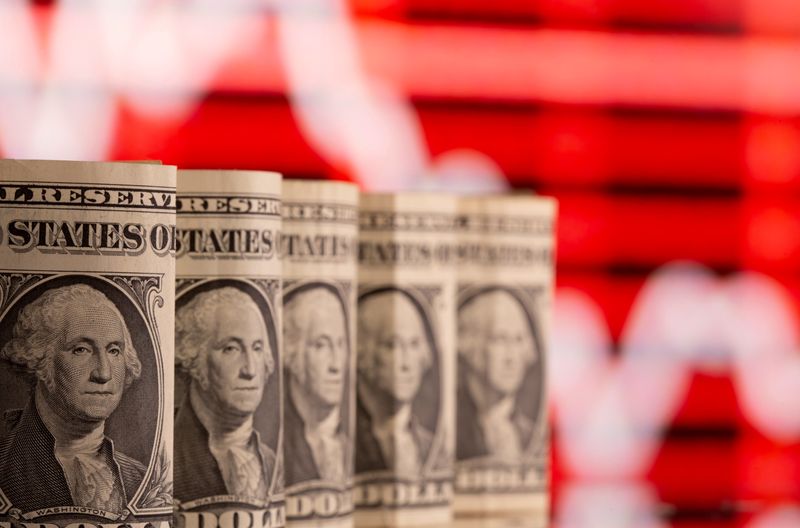 SINGAPORE (Reuters) – The dollar hovered near recent lows on Tuesday as traders braced for a slew of central bank meetings from Australia to Europe and Canada this week, looking for any signs that they are making progress towards policy normalisation.

The possibility of a tapering delay in the United States, after weaker-than-expeced jobs data on Friday, has put extra focus on policymakers elsewhere and put pressure on the dollar.

First up is Australia, where an announcement is due at 0430 GMT. The Australian dollar has paused a recent rally as markets wait to see whether lockdowns in Sydney and Melbourne have derailed plans to taper bond purchases.

If the central bank pauses its tapering plans, traders are likely to sell the currency, possibly pushing the Aussie towards its support level around $0.7420, according to IG Markets analyst Kyle Rodda. A hawkish central bank would send the currency higher, he said. [AUD/]

Markets are also awaiting Chinese trade data due around 0300 GMT, expected to be weighed down by a slowdown in growth and disruption from COVID-related port closures.

On Wednesday, the Bank of Canada is expected to keep rates steady, but to maintain on course for a hike before the end of the year, shaking off a surprise contraction in the Canadian economy in the second quarter.

The Canadian dollar is hovering near its highest level in about three weeks and is above its 200-day moving average at C$1.2525 per dollar.

The main event of the week falls on Thursday when the European Central Bank meets, with the focus on a potential cut to the pace of bond purchases, particularly following some hawkish comments from policymakers last week.

A majority of economists polled by Reuters expect a slowdown in ECB bond purchases, especially after data last week showed inflation surging to a 10-year high. But an overnight rally in stocks and a dip in the euro suggests traders may not be betting on such a scenario.

After touching a one-month high in the wake of disappointing U.S. labour data on Friday, the euro has been unable to hold above $1.19 and last bought $1.1881. The pan-European index is within a whisker of a record high.

Elsewhere the Japanese yen was firm at 109.76 per dollar and sterling was steady at $1.3848. The New Zealand dollar edged 0.3% higher as the country appears to be containing a coronavirus outbreak and swaps markets are pricing in nearly 100 basis points of policy tightening by May.

Looming over the market and the central bank meetings this week is the stance of the U.S. Federal Reserve, which has flagged asset purchase tapering before year’s end but has said it depends on labour markets which are suddenly looking wobbly.

Friday’s payrolls figures, which showed 235,000 jobs created last month against economists’ expectations of 728,000 were enough to sink chances of a tapering announcement this month, said NatWest’s head strategist John Briggs in a note – but it won’t be clear for another month how long the delay may be.

“It does not necessarily derail our current timeline of a November announcement for December start,” Briggs added said. “The next payroll report on October 8th now looms very large as the main event in considering the timing of tapering.”

The ‘election about nothing’ could become an opportunity for something

Entergy estimates repair costs of up to $2.6 billion from Hurricane Ida By Reuters