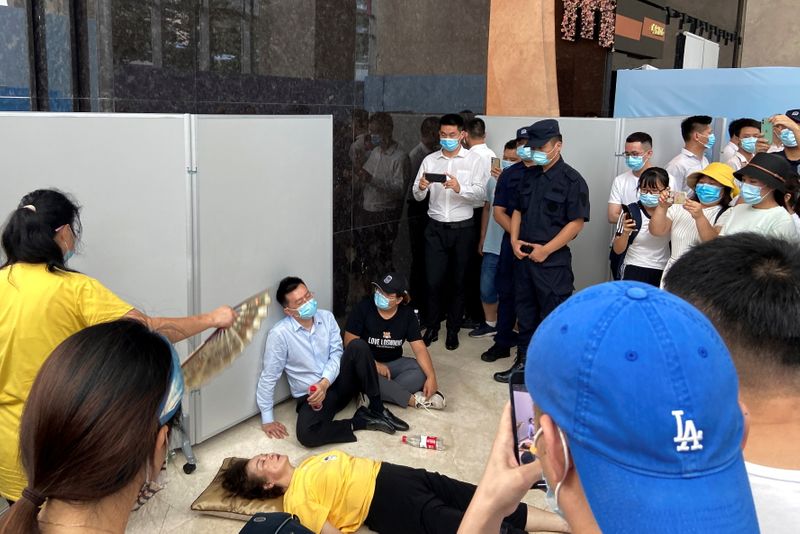 © Reuters. A woman receives aid on the ground next to Du Jiang, the general manager and legal representative of Evergrande’s wealth management division, while people gather to demand repayment of loans and financial products at the Evergrande’s headquarters, in Shen

Around midday, more than 60 uniformed security personnel formed a wall in front of the main entrances to the glistening tower in the southern boomtown of Shenzhen, where protesters shouted at company representatives.

“A company as big as yours, how much money has been swindled from ordinary people?” a woman said to Du Liang, identified by staff as general manager and legal representative of Evergrande’s wealth management division.

In the early hours of Monday, Du read out a proposal for repayments for holders of wealth management products, according to financial media outlet Caixin, but protesters at the company’s headquarters appeared to reject it.

“They said repayment would take two years, but there’s no real guarantee and I’m worried the company will be bankrupt by the end of the year,” said a protester surnamed Wang, who said he works for Evergrande and had invested 100,000 yuan ($15,497) with the company, while his relatives invested about 1 million yuan.

Evergrande late on Monday said online speculation about its bankruptcy and restructuring was “totally untrue”.

The company was facing “unprecedented difficulties”, it said in a statement, but would do everything possible to resume work and protect the legitimate rights and interests of its customers.

Several protesters said Du had remained in the lobby overnight. He was seen sitting on the ground and slumped against a wall on Monday, visibly exhausted.

Protesters took it in turns to air grievances and at one point a woman in the crowd collapsed.

The mood was tense, with protesters attempting unsuccessfully to push through a security line blocking access to lifts.

“Evergrande, give us our money back!” they chanted.

Three company representatives on the scene, including Du, did not respond to questions from Reuters.

Evergrande’s media relations office and police in Shenzhen did not immediately reply to requests for comment on the protest.

The protest comes amid worries the country’s most indebted developer, with liabilities of 1.97 trillion yuan ($305 billion), will be unable to repay investors and that its debt woes could pose systemic risks to China’s financial system.

Some videos circulating on Chinese social media on Monday showed what were described as Evergrande-related protests elsewhere in China. Reuters could not immediately verify them.

According to Caixin, Evergrande in the early hours of Monday proposed that investors choose to accept 10% of the principle and interest of the matured product now and the rest via 10% instalments quarterly, payment by property assets, or by using the outstanding product value to offset home purchase payments.

On Friday, Evergrande vowed to repay all of its matured wealth management products as soon as possible.

Many buyers of Evergrande-built homes have expressed concern about down-payments made for projects now suspended by the property firm, airing concerns on China’s Twitter-like Weibo (NASDAQ:).

Hundreds of people in recent months have also protested on an online forum set up by the People’s Daily, the official newspaper of the Chinese Communist Party, seeking government help.

On Monday, the Shanghai Stock Exchange paused trading in Evergrande’s May 2023 bond because of abnormal fluctuations, after it had fallen more than 30% to 53.43 yuan.