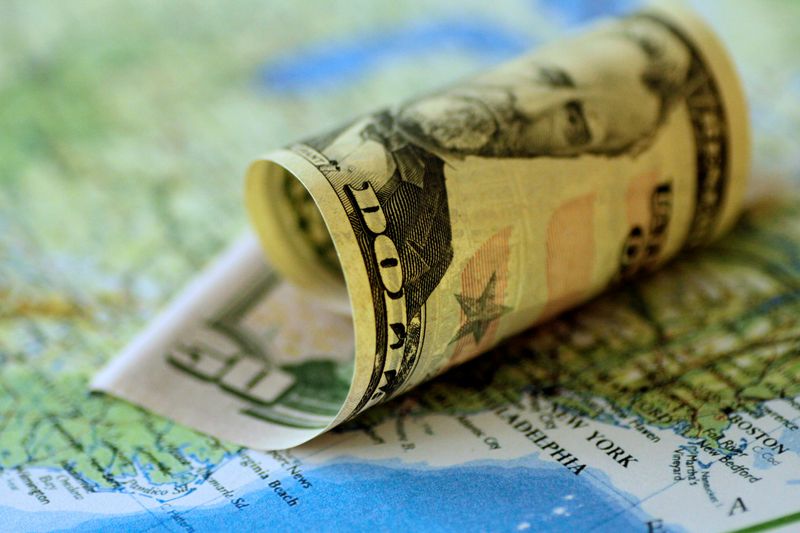 ORLANDO, Fla. (Reuters) – Delta variants, spending splurges, inflation scares and debt ceilings all threaten to bamboozle U.S. bonds, and yet it’s the delicate and often misread dance between the Fed and Treasury that’s likely keeping everything in check.

On one side the Federal Reserve will likely start reducing its $80 billion-a-month Treasury purchases by year-end – a moment many investors had feared would undermine the market and send yields surging.

But the U.S. Treasury will be borrowing less over the year ahead too, with a rapidly shrinking budget deficit and funding needs compared to the blowouts of 2020.

All else equal, if the gradual exit of the biggest single buyer from the market is matched by an equivalent cut in the supply of new debt, the two should cancel each other out pricewise. And perhaps that’s what the seemingly peculiar stability of the bond market since April has been telling us.

The question is whether one of those forces ends up dominating – or whether they are deliberately kept in synch.

The exact numbers or timeframe of the Fed’s taper are still unknown of course, much less details on what part of the maturity spectrum Treasury will concentrate debt sales. Wider growth and inflation developments remain critical and unknown variables.

But the basic dynamics are a powerful stabilizer.

Joseph Wang, a former senior trader on the Fed’s open markets desk, reckons that the two will “roughly cancel each other out … so the stock of private sector Treasury holdings will continue to grow at around the same pace. The Fed will just own a smaller share of the overall stock.”

On the funding side, Treasury will borrow significantly less in fiscal years 2022 and 2023 than this year thanks to rebounding economic growth and tax revenues, a reduced need for crisis-level support for individuals and businesses, and new spending bills being pushed further out into the future.

This will mean a smaller debt-raising program. The Treasury Borrowing Advisory Committee, a group made up of major fixed income market participants, says its baseline scenario calls for a 19% reduction in coupon issuance in calendar year 2022 growing to an accumulated 35% reduction 12 months later.

It’s also worth noting that Treasury goes into next year having borrowed significant amounts in the year following the outbreak of the COVID-19 pandemic. Gennadiy Goldberg at TD Securities estimates net coupon issuance in fiscal year 2021 was $2.73 trillion, up $1.37 trillion from the previous year.

But not all of it was needed, a key reason why Treasury’s cash balance at the Fed ballooned and caused distortions at the ultra-short end of the curve, and why borrowing will be lower next year.

The net amount will largely depend on the government’s fiscal plans. Despite headlines of the Biden administration’s ambitious $3.5 trillion spending plans over the next decade, U.S. fiscal policy will tighten significantly in 2022 and 2023.

In terms of funding requirements, the CBO projects a net borrowing need of just under $1.5 trillion in fiscal year 2022, falling to around $750 billion in 2023. That compares with just under $2 trillion this year.

The Fed, meanwhile, is expected to lay out its taper timetable before the end of this year, and begin winding down its purchases of Treasuries next year. At $80 billion a month currently, it is hoovering up $960 billion on an annual basis.

If it tapers that at a steady $10-$15 billion-a-month pace, fresh purchases will cease in around six to eight months.

Over the course of fiscal year 2022, however, the Fed will still accumulate more than $500 billion in new purchases. Still, that will be around $400 billion less than in 2021, roughly similar to the fall in government net funding needs.

If the Fed’s $960 billion bond purchases in 2021 are reduced to zero in fiscal year 2023, that again roughly offsets the $1 trillion reduction in government funding needs over the same time frame, according to CBO estimates.

A multitude of other factors will determine the Treasury market’s course over the coming years, such as President Joe Biden’s stimulus and tax-raising plans, and where inflation and inflation expectations are headed.

But shifts in Fed demand and Treasury supply could provide the broad framework within which everything else plays out.

U.S. CDC considers ‘test-to-stay’ program in schools instead of quarantine By Reuters