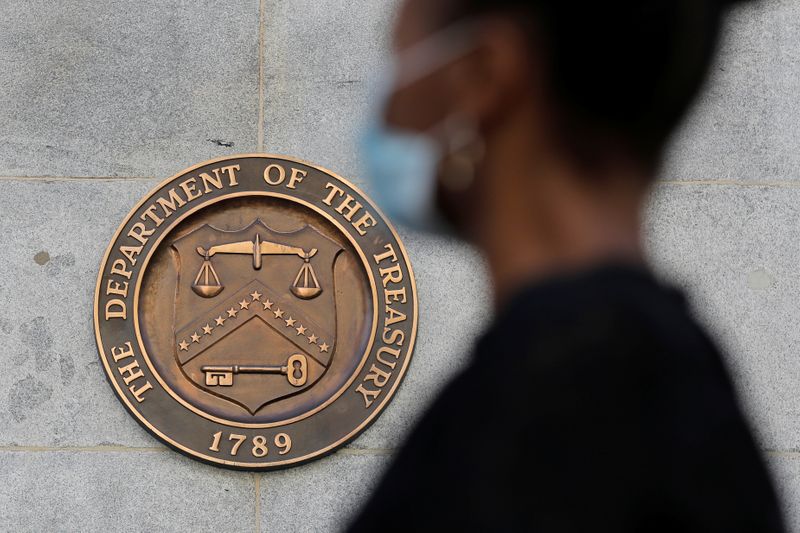 © Reuters. Signage is seen at the United States Department of the Treasury headquarters in Washington, D.C., U.S., August 29, 2020. REUTERS/Andrew Kelly

By Andrea Shalal and David Lawder

Morton, top climate adviser to Treasury Secretary Janet Yellen, said in an interview such deals could be small and complex, but they could be useful tools to respond to the climate crisis.

Morton said they were making good progress on drafting plans ahead of mid-October, when the World Bank and International Monetary Fund hold their regular fall meetings.

The issue, he said, was to “get the maximum climate bang for the lowest public buck. Ultimately this is about using scarce public dollars responsibly and enabling the private sector to invest wherever possible, to affect the climate outcomes we’re looking for.”

Any climate strategy, including debt-for-nature and adaptation, needed to be assessed in terms of how much carbon abatement they achieved per dollar of public resources.

“Debt-for-nature represents some very attractive opportunities in that regard,” he said. “We do have programs within Treasury that do debt-for-nature swaps, and they’re certainly part of the arsenal of tools that we look at as we think about responding to climate opportunities.”

Morton said Treasury was meeting regularly with the multilateral development banks on the reports requested by Yellen, and had been impressed so far with the work done since the July meeting. Yellen plans to reconvene the group in October on the sidelines of the World Bank and IMF annual meetings.

IMF Managing Director Kristalina Georgieva https://www.reuters.com/article/us-imf-world-bank-climate-swaps/imf-world-bank-to-unveil-green-debt-swaps-option-by-november-georgieva-says-idUSKBN2BV2NU told reporters in April that green debt swaps had the potential to spur accelerated action on climate change in developing countries, and said the fund and the World Bank would work together to advance an option for such instruments by November.