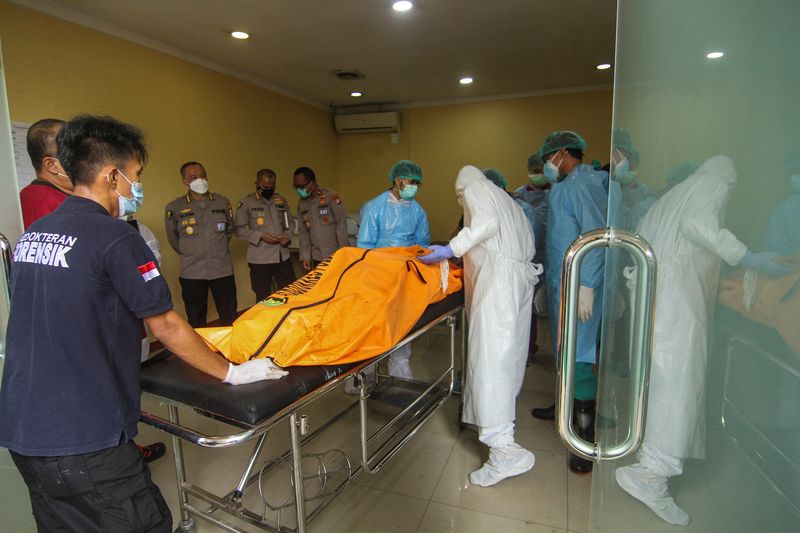 © Reuters. Disaster Victims Identification (DVI) police officers carry a bag containing the body of a victim of a prison fire at a police hospital for identification following a fire overnight at an overcrowded jail in Jakarta, Indonesia September 8, 2021, in this p

JAKARTA (Reuters) – The death toll from a blaze that tore through an Indonesian jail has risen to 44, as authorities pledged to look at whether more inmates could receive rehabilitation for drug-related offences to ease chronic overcrowding in the prison system.

Wednesday’s fire at the penitentiary in Tangerang, on the outskirts of the capital Jakarta, took hold in a prison block housing more than three times the number of prisoners it was designed to contain.

Built for 38 inmates there were 122, mostly imprisoned for drug-related offences, detained at the time of the blaze, which was one of the most deadly in Indonesia in recent years.

The initial death toll stood at 41, but three more prisoners who were suffering severe burns died overnight in hospital, Rika Aprianti, a spokeswoman from the prison department at the Indonesian justice ministry said on Thursday.

The ministry said that all the victims of the fire, which police suspect may have been caused by an electrical fault, were inmates.

The incident has triggered calls for Indonesia to reconsider its strict narcotics laws, which see a disproportionately high number of inmates imprisoned for drug-related offences, including many who are small-time users.

Visiting the site of the fire on Wednesday, Indonesia’s chief security minister Mahfud MD said that out of 200,000 inmates detained across the country, more than half were incarcerated for drug-related crimes.

The high rates, he said, warranted a re-evaluation.

“So, I had a discussion with the justice minister. We talked about drug dealers and how they should be punished based on a final verdict,” he said.

“But the victims, the users who become victims, we will think about whether they should all be sent to prison or not. Is it better to rehabilitate them?”