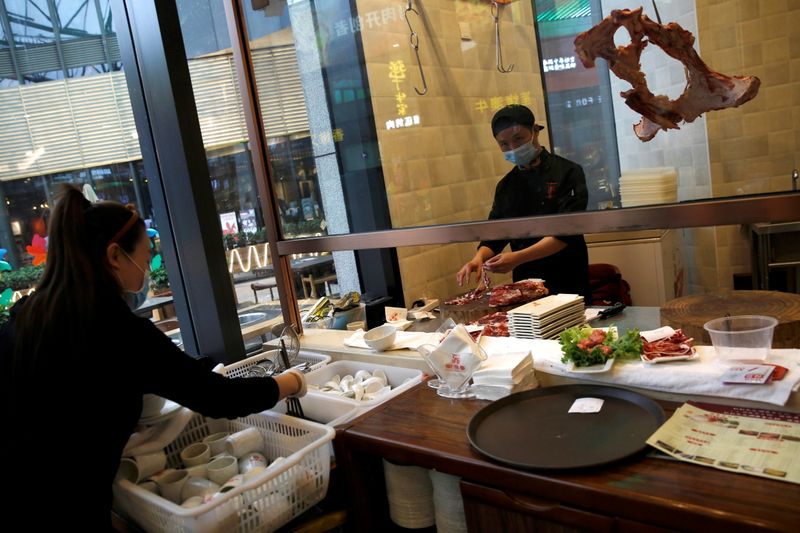 © Reuters. FILE PHOTO: A chef wearing a face mask prepares beef as a waitress sorts tableware at a beef hotpot restaurant in Beijing, amid an outbreak of the novel coronavirus disease (COVID-19) in the country, China April 7, 2020. REUTERS/Tingshu Wang/File Photo


By Dominique Patton and Nayara Figueiredo

BEIJING (Reuters) – Chinese beef importers said on Monday the suspension of exports by top supplier Brazil due to two cases of mad cow disease has had no immediate market impact, with some still making purchases in anticipation of a quick resumption of trade.

Brazil said on Saturday it had confirmed two cases of ‘atypical’ mad cow disease in different states, and was suspending beef exports to China as part of a prior agreement on the issue with its top buyer.

Despite Brazil’s dominant 40% share of China’s beef imports, prices had not moved by Monday and some importers were still looking for deals.

In Brazil, the fourth-largest beef processor Frigol said on Monday it would furlough workers at one of its plants for 15 days, with a source with knowledge of the matter telling Reuters the move was in response to the export suspension.

Frigol’s press office said the furloughs were due to a seasonal slowdown in Israeli demand and declined to comment on a possible connection to China exports. The company did not immediately give details about how many were furloughed

‘Atypical’ mad cow is considered to be of lower risk than the classical form of the disease, as it occurs naturally and only sporadically in older cattle.

‘Classical’ mad cow disease, or BSE, is transmitted by contaminated feed and has been linked to variant Creutzfeldt-Jakob disease in people.

Brazil previously suspended exports for 10 days in 2019 after reporting an ‘atypical’ case.

China’s customs authority did not immediately respond to a request for comment.

Brazil has shipped more than 500,000 tonnes of beef to China from January to July this year, or 38% of China’s total imports, Chinese customs data show, putting it far ahead of No.2 supplier, Argentina, which supplied just under 300,000 tonnes.

“If this only lasts 15 days, there will be no impact at all. Brazil is still producing, and it takes two months to ship meat here anyway,” he added, declining to be identified because he is not permitted to talk to media.

While China’s imports of pork are falling because of a recovery in domestic supply, Chinese demand for beef continues to grow.

Ireland, a smaller beef supplier to China, reported a case of ‘atypical’ mad cow disease in May last year. It has not yet been able to resume exports.