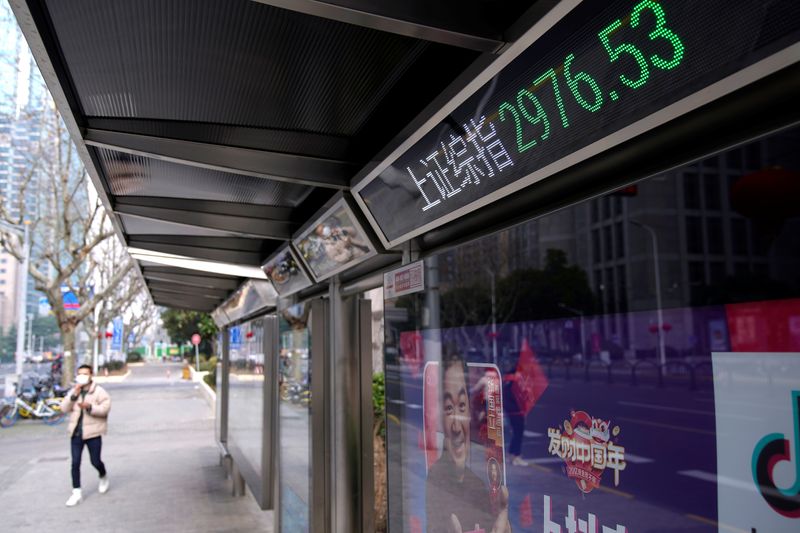 © Reuters. FILE PHOTO-A men wearing a mask walk by an electronic board showing the Shanghai and Shenzhen stock indexes in Shanghai, China, as the country is hit by an outbreak of a new coronavirus, February 3, 2020. REUTERS/Aly Song


SHANGHAI (Reuters) – China will launch on Friday a long-awaited Wealth Management Connect scheme linking its southern province of Guangdong with neighbouring Hong Kong and Macau, as Beijing moves to integrate the mainland with the two territories more closely.

The cross-boundary scheme will initially lead to combined fund flows of 300 billion yuan ($46.53 billion) in the Greater Bay Area, potentially benefiting asset managers and banks such as HSBC and Standard Chartered (OTC:).

The Hong Kong Monetary Authority (HKMA) is to hold a news conference on Friday about Wealth Connect, it said in an invitation to Reuters.

On Thursday the central bank said the country would soon launch the scheme, details of which were revealed in June 2020.

The Wealth Connect will meet growing demand from investors in the Guangdong-Hong Kong-Macau Greater Bay Area (GBA), boosting its gateway role, the World Economic Forum and consultancy Oliver Wyman said in a report this week.

“We believe banks with strong onshore and offshore branches in the GBA will enjoy an advantage when leveraging this opportunity,” said Jasper Yip, partner at Oliver Wyman.

Initially, net cash flows in either direction must not exceed 150 billion yuan and the individual investment quota is 1 million yuan.

China’s past similar initiatives include Stock Connect and Bond Connect, but Wealth Connect this is the first cross-boundary scheme focused on the Greater Bay Area, whose combined gross domestic product is similar to that of Australia or South Korea.

In 2017, President Xi Jinping unveiled plans to build the Greater Bay Area into an economic powerhouse, and economic integration appears to be accelerating after China imposed a new security law in Hong Kong last year.

The region “provides important levers for global asset managers to expand their presence in China,” said Ray Chou, another partner at Oliver Wyman.