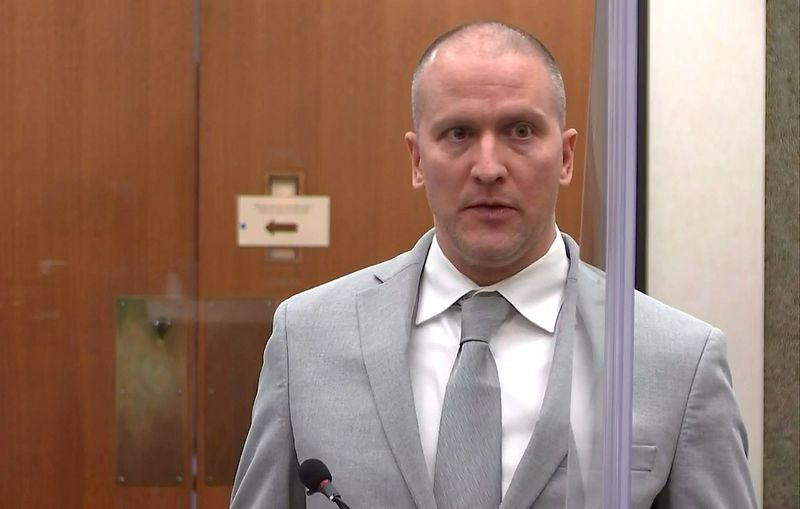 © Reuters. FILE PHOTO: Former Minneapolis police officer Derek Chauvin addresses his sentencing hearing and the judge as he awaits his sentence after being convicted of murder in the death of George Floyd in Minneapolis, Minnesota, U.S. June 25, 2021 in a still imag

(Reuters) – The former Minneapolis police officer convicted of murdering George Floyd pleaded not guilty on Thursday to violating a teenager’s civil rights by using a neck restraint similar to the one that killed Floyd, a Black man whose death galvanized a national protest movement against racism.

In the current case, the former officer, Derek Chauvin, who is white, stands accused of violating the rights of a then-14-year-old Black boy in 2017 by hitting him with a flashlight and holding a knee on his neck while he was prone, handcuffed and not resisting arrest.

Chauvin, now imprisoned for 22-1/2 years for Floyd’s murder, formally entered his plea on a two-count indictment in the teen’s civil rights in federal court. He appeared via video link from a state prison.

“Not guilty, your honor,” Chauvin replied when asked for his plea by U.S. Magistrate Judge Hildy Bowbeer.

The incident involving the 14-year-old occurred as Chauvin was responding to a domestic violence call in which the teen was accused of assaulting his mother, local media reported.

A bystander’s video of Chauvin kneeling on the neck of the handcuffed Floyd for more than 9 minutes during the arrest caused outrage around the world and triggered the largest protest movement seen in the United States in decades.

Chauvin was helping arrest Floyd on suspicion of using a fake $20 bill.

In April, a state court jury found Chauvin guilty of Floyd’s murder, and he was sentenced in June.

The verdict https://www.reuters.com/world/us/jurors-resume-deliberations-derek-chauvin-murder-trial-2021-04-20 was widely seen as a landmark rebuke of the disproportionate use of police force against Black Americans.

The three other former officers, charged with aiding and abetting in Floyd’s murder, are due to go on trial on state charges in March 2022.