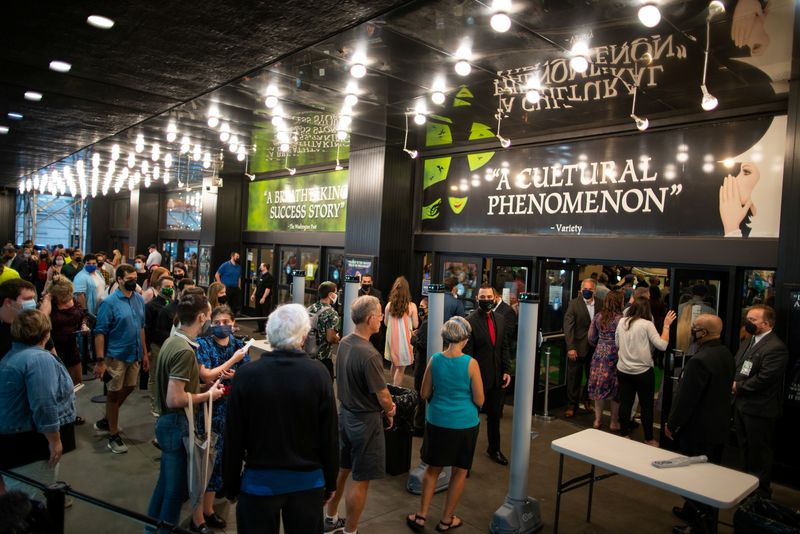 © Reuters. Audience members arrive outside the Gershwin theater ahead of the first return performance of Wicked, as Broadway shows begin to re-open to live audiences after being closed for more than a year due to the outbreak of the coronavirus disease (COVID-19), i

The curtain rose again on top musicals “Hamilton,” “The Lion King” and “Wicked” before packed audiences in the biggest sign that Broadway is open again for business.

“Hamilton” creator Lin-Manuel Miranda kicked off the night by hosting a rousing impromptu rendition of “New York, New York” at the stage door with the casts of all three musicals.

“Broadway is back. Get a mask, get vaccinated and come see live theater!” Miranda urged fans.

Broadway was one of the first institutions to close when the pandemic hit in mid-March 2020 and is the last to reopen in the United States. It has taken months to upgrade air filter systems and figure out how to maintain social distancing on stages full of blood, sweat and tears.

Audiences, actors, musicians and backstage crew must provide proof of full vaccinations and wear masks during all Broadway and off-Broadway shows in New York.

“Hamilton,” “The Lion King” and “Wicked” were the biggest box office earners, each taking in more than $1 million a week, before the pandemic shuttered some 40 theaters in mid-March 2020, throwing thousands of actors, stagehands, musicians and dancers out of work.

“Every single nerve is tingling with joy and world peace. How lucky we are to be back at work,” said “Hamilton” producer Jeffrey Seller, speaking at the theater.

“It has been 700,000, 100 and 25 minutes since we’ve last been able to perform for a live audience, and what I perceive here is 1,300 people who are teeming with the energy and the desire to get back to the theater,” Seller added.

Musicals “Hadestown” and “Waitress” returned 10 days ago, and the first new play, “Pass Over,” opened its doors in August. The discount TKTS ticket booth in Times Square also reopened on Tuesday.

Talking Heads musician David Byrne, whose “American Utopia” musical reopens on Friday, said theater-goers are overjoyed to be back.

Another dozen musicals and plays will re-open during September, bringing back one of the city’s biggest cultural attractions. City authorities hope their return will also spur tourism and revitalize once-crowded restaurants, bars and hotels.

Broadway and city authorities are organizing a weekend festival of concerts and performances in Times Square to promote theater, with performers from 18 musicals taking part.

“Broadway’s reopening is like a huge welcome mat for New Yorkers and visitors to return to Times Square,” Tom Harris, president of the Times Square Alliance, said in a statement.