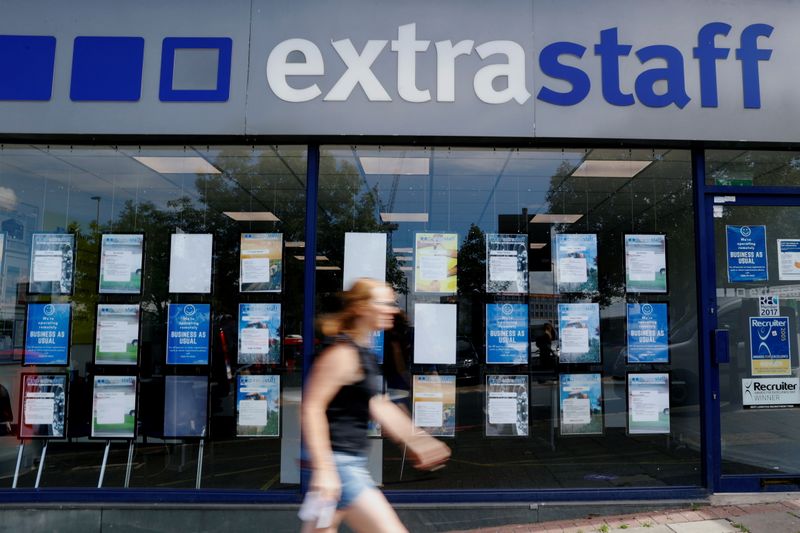 © Reuters. FILE PHOTO: A woman walks past an employment agency “ExtraStaff” in North London, amid the spread of the coronavirus disease (COVID-19), in London, Britain June 16, 2020. REUTERS/John Sibley

The share of nursing roles with signing bonuses remained high, with some listings offering up to 5,000 pounds ($6,821.00), according to the survey.

Acute labour shortages due to the pandemic, which forced many overseas workers to return home, and Brexit, which has restricted access to EU workers, could last a couple of years, according to some estimates. (https://

In recent months, recruiters for white-collar roles have flagged wage inflation as companies are forced to pay higher salaries to woo talent.

Employers focusing on one-off financial incentives like bonuses for signing on, rather than raising wages, might be betting on current hiring difficulties being temporary, Indeed Hiring Lab economist Jack Kennedy wrote in a note.

A survey in August by Britain’s Chartered Institute of Personnel and Development said firms planned to increase staff numbers by the most in more than eight years over the coming months as the economy reopens after the end COVID-19 curbs.

While the share of postings offering joining bonuses remains small overall, it seems likely that signing incentives, which in many cases run to several thousand pounds, will remain a notable feature of the recruitment landscape in the near term, Kennedy added.