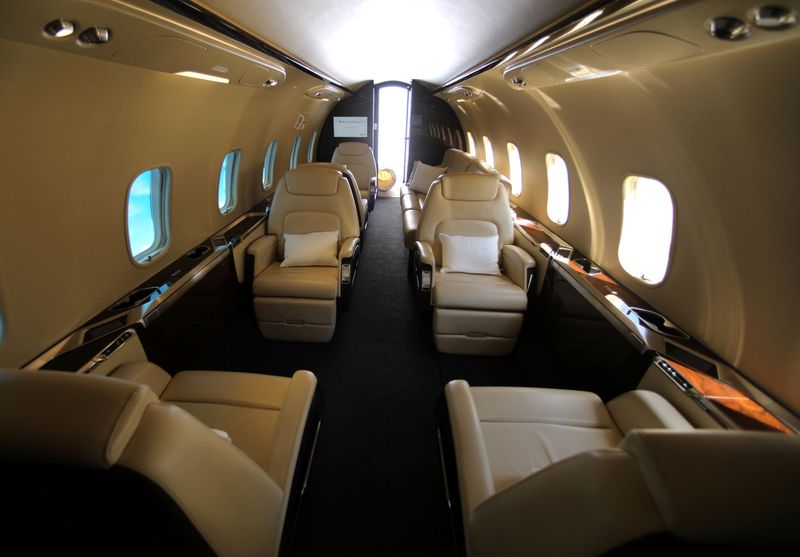 © Reuters. FILE PHOTO: The inside of a fuselage of a Bombardier 350 Challenger jet is seen on display for attendees to view at the Milken Institute Global Conference in Beverly Hills, California, U.S., May 2, 2017. REUTERS/Mike Blake

MONTREAL (Reuters) – Bombardier (OTC:) is launching an updated version of its strong-selling Challenger 350 corporate jet with a redesigned interior, as more wealthy travelers seek to fly private during the COVID-19 pandemic, sources familiar with the matter said.

Canada’s Bombardier is expected to announce its first update of the Challenger 300 family since the 350’s launch in 2014 at a virtual event on Tuesday.

Challenger 350, which seats up to 10 passengers and lists for $26.7 million, remains one of Bombardier’s best-sellers, with fleet operator Flexjet ordering 40.

But with only limited upgrades over the last seven years it risked losing ground to rivals in a market where wealthy buyers demand the latest features, analysts said.

“You need to keep programs going,” said business aviation analyst Rolland Vincent. “You have to keep ahead of the game.”

Corporate planemakers often choose to refresh or update existing models with new features instead of producing new clean-sheet designs that are more costly and time-consuming to bring to market. It’s not clear when the refreshed Challenger model would be available or how much would it cost.

The pandemic has fuelled demand for corporate and private jet travel in the United States, with a shortage of pre-owned business jets and demand from wealthy travelers to fly with fewer people on a private plane underpinning prices and filling order books for new corporate aircraft.

The refurbished launch is critical to Bombardier, which has turned into a pure-play business jet manufacturer, after selling its train business to Alstom (PA:). It generated revenue of $6.5 billion in 2020 and plans to grow by focusing on its Challenger and Global jets.

Challenger is the market leader in the super-midsized business jet category, which bridges small corporate planes and large-cabin aircraft for 13 to 19 travelers, but faces competition from U.S. and Brazilian rivals.

It competes with Embraer SA (NYSE:), Textron Inc (NYSE:) among others in a corporate jet market which generated more than $17.2 billion in deliveries among the top players in 2020.

They include Textron’s Cessna Citation Longitude which entered service in 2019, and Embraer’s Praetor jets which are longer-range variants of the Brazilian planemaker’s mid-sized Legacy line.

“That space has become quite busy” Vincent said.

Bombardier said it would generate higher revenue and use less cash in 2021, helped by a rebound in business jet flights.

According to FlightAware data, business aviation traffic in the United States, the largest market for corporate aircraft, grew 16% on average between August 22 and 29, compared with the same dates in 2019, underscoring the sector’s recovery.