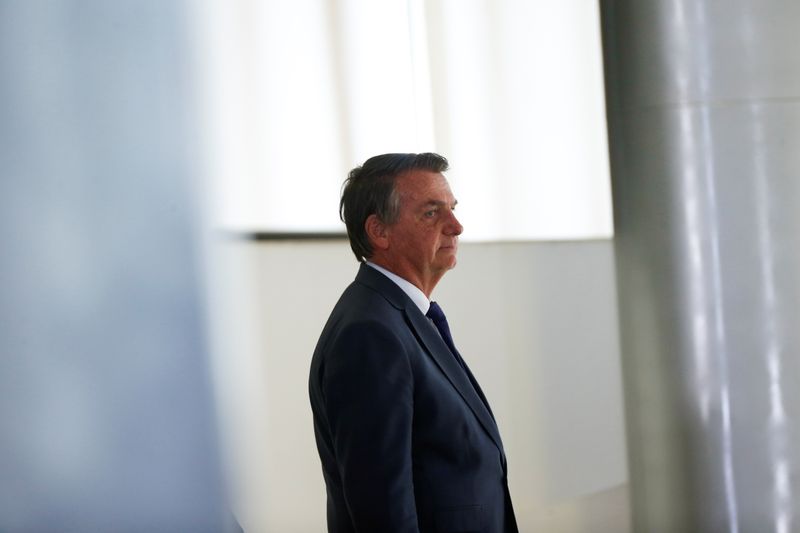 BRASILIA (Reuters) -Brazilian President Jair Bolsonaro on Thursday said he never intended to attack any branch of the government, as he sought to defuse a dispute with the Supreme Court in a move that boosted markets.

Earlier this week, as pro-Bolsonaro marches took place across Brazil, the president called on Supreme Court Justice Alexandre de Moraes to step down and said he would no longer comply with his rulings, deepening a rift with the judiciary.

On Thursday, pro-Bolsonaro truckers, seeking to support the president in his battle with the Supreme Court, blocked highways across Brazil, threatening key export routes.

As tensions mounted, Bolsonaro put out an official statement on Thursday afternoon seeking to smooth over his tussle with the Supreme Court, whose justices he has accused of preventing him from governing.

Brazil’s currency strengthened dramatically after the presidency released its statement, closing 1.8% stronger against the dollar. After losing 4% on Wednesday in the wake of the controversial comments, Brazil’s stock index rebounded 1.7% on Thursday following his sudden moderation in tone.

In his statement, the former army captain said his occasional strong language came from “the heat of the moment” and any problems with the justices should be resolved in court.

The tensions with Brazil’s top court have created one more crisis for the embattled far-right leader.

The president’s poll numbers are already slipping as he has overseen the world’s second deadliest coronavirus outbreak, nearly double-digit inflation and stubborn unemployment levels ahead of next year’s presidential election.

Later in the evening, in a live broadcast on social media, Bolsonaro maintained the conciliatory tone saying he would not step outside the bounds of the constitution and that he did not have any problems with Brazil’s institutions.

He said his disagreements were with individual public figures. The president did, however, repeat that he believed the electronic voting system was vulnerable to interference, an issue that has put him at loggerheads with the Supreme Court and attracted condemnation from across the political spectrum.