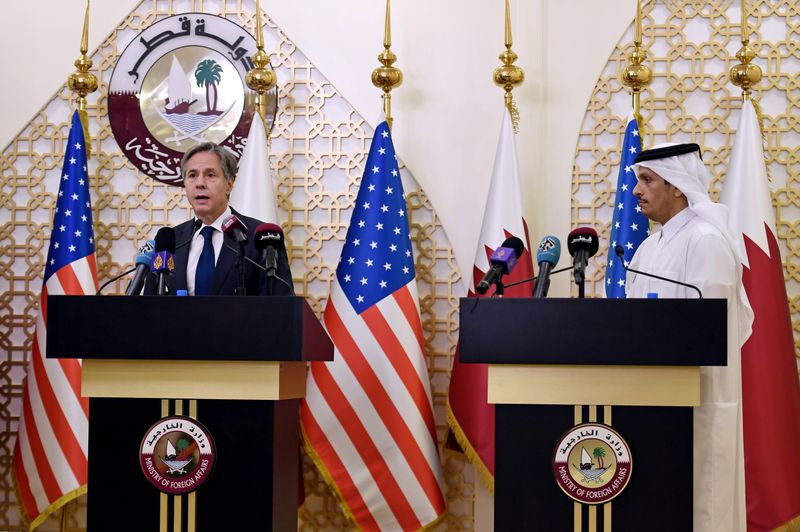 DOHA (Reuters) – U.S. Secretary of State Antony Blinken denied on Tuesday reports that the Taliban had blocked Americans attempting to fly out of of a northern Afghan city, but said the group had not allowed charter flights to depart because some people lacked valid travel documents.

Reports have emerged over the past few days that 1,000 people, including Americans, had been stuck at Mazar-i-Sharif airport https://www.reuters.com/world/asia-pacific/some-1000-people-awaiting-taliban-flight-clearance-mazar-i-sharif-new-york-times-2021-09-05 for days awaiting clearance for their charter flights to leave. One organizer blamed the delay on the State Department.

Blinken was speaking at a news conference in Qatar, a U.S. ally that has emerged as a key interlocutor to the Taliban, which seized power in Kabul on Aug. 15 after the Western-backed government collapsed.

Blinken said Washington had identified a “relatively” small number of Americans seeking to depart from Mazar-i-Sharif.

But one of the main challenges around the charter flights attempting to depart was that some people lacked the valid travel documents which effectively blocked the departure of the entire group, he said.

“And it’s my understanding is that the Taliban has not denied exit to anyone holding a valid document, but they have said those without valid documents, at this point, can’t leave,” Blinken said.

“Because all of these people are grouped together, that’s meant that flights have not been allowed to go,” he said.

Blinken added that the Taliban were upholding their commitment to allow Americans with valid travel documents to leave.

“We are not aware of anyone being held on an aircraft or any hostage like situation at Mazar-i-Sharif. So we have to work through the different requirements and that’s exactly what we are doing,” he said.

Speaking alongside Blinken, Qatar’s Foreign Minister Sheikh Mohammed bin Abdulrahman Al Thani said his country hoped Kabul airport would be up and running for passengers in the next few days, but no agreement on how to run it had yet been reached.

Blinken and U.S. Secretary of Defense Lloyd Austin are in Qatar to seek the evacuation of Americans and Afghans at risk following the Taliban takeover and to build a consensus among allies on how to respond to the Islamist movement.