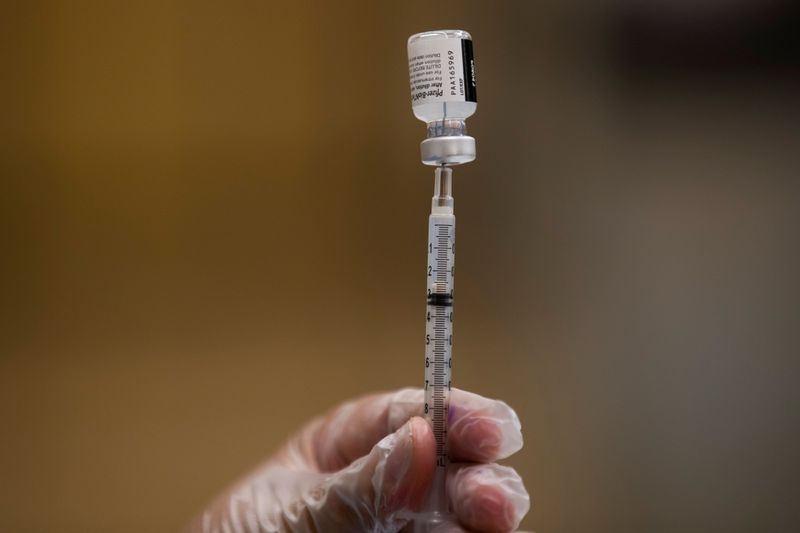 
By Tom Hals and Daniel Wiessner

(Reuters) – U.S. President Joe Biden’s plan requiring more than 100 million Americans to get vaccinated against COVID-19 relies on a rarely used workplace rule with a history of being blocked in court, making it an inviting target for legal challenges by employers.

As part of Biden’s plan, unveiled Thursday https://www.reuters.com/world/us/biden-deliver-six-step-plan-covid-19-pandemic-2021-09-09, private employers with 100 or more staff must ensure that their workers are fully vaccinated or produce a negative COVID-19 test weekly.

The measure will be implemented through an emergency temporary standard, or ETS, issued by the U.S. Department of Labor’s Occupational Safety and Health Administration (OSHA), which regulates workplaces. The rule is expected in the coming weeks, and it was not clear when it would take effect.

OSHA can implement an emergency standard when workers are exposed to a “grave danger” and the standard is needed to protect them. This allows the agency to cut short the usual process for developing a standard, which averages seven years.

The Republican National Committee and some Republican state governors have already threatened https://www.reuters.com/world/us/bidens-covid-vaccine-mandate-angers-republicans-libertarians-2021-09-10 to sue over Biden’s vaccine plan, which also covers most federal employees and contractors, and some healthcare workers.

While many large employers have said they plan to comply https://www.reuters.com/world/us/corporate-union-reaction-biden-vaccine-mandate-companies-2021-09-09, some businesses are also likely to sue.

“Some employers reflexively oppose OSHA,” said Michael Duff, a professor at University of Wyoming College of Law. “They will not like this precedent.”

Opponents could argue a grave danger, which is not defined in the law, doesn’t exist on a national level as the current spike in COVID-19 cases has been regional.

Biden said on Thursday that the country was losing patience with those who declined to get vaccinated, with just over 62% of Americans fully inoculated against COVID-19.

Cases of the disease remain stubbornly high in the United States, and job growth and other signs of economic health are slowing as hospitals fill up.

“COVID is new and has been a grave danger in the workplace. I think the agency is on solid legal ground here,” said Debbie Berkowitz, a former senior OSHA official.

There is not much precedent for an emergency temporary standard.

Before the pandemic, OSHA issued only nine emergency temporary standards – and the last one was in 1983. Courts blocked or stayed four of them and partially vacated another, according to a report by the Congressional Research Service.

OSHA implemented an ETS in June to address COVID-19 for healthcare settings. It was challenged in court by two labor unions which wanted the standard expanded to cover other industries.

The unions’ lawsuit is ongoing in the U.S. Court of Appeals for the District of Columbia.

After issuing its June emergency standard, OSHA invited comments on whether the ETS should become a final rule. The American Hospital Association urged withdrawing the standard, arguing that COVID-19 was not a grave danger at the job site since studies showed such infections were more likely to occur in the community.

U.S. Secretary of Labor Marty Walsh said in June that the standard was targeted at the most at-risk workers.

OSHA’s mandate could also be vulnerable to legal challenges because months have passed since vaccines became widely available, and it may be difficult for the agency to explain why there is a grave danger now but there was not one earlier this year, said James Sullivan of law firm Cozen O’Connor, who represents employers.

Courts also could find that the mandate’s 100-employee threshold is arbitrary, providing grounds to invalidate the rule, according to Sullivan.

The Biden administration may be hoping that any defeat in court comes after many employers begin to comply with the rule and millions of people are vaccinated, Sullivan said.

If employers don’t comply, the fines are potentially considerable, at $14,000 for each employee in violation.

“That could result in some very nasty math,” said Eric Hobbs, an employment lawyer with Ogletree Deakins.