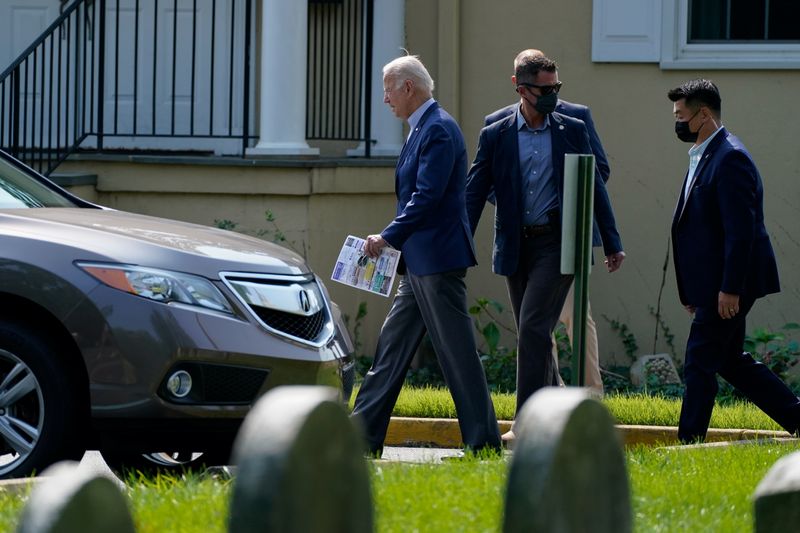 
By Jeff Mason and Steve Holland

Fresh off travel last week to view flood damage from Hurricane Ida in New York and New Jersey, Biden will visit the National Interagency Fire Center on a stop in Boise, Idaho, before flying to Sacramento, California, to see wildfire damage in the area.

Biden has used the storms and fires across the country recently to highlight his call to fight global warming, calling climate change an existential threat last week.

“It’s not going to get any better,” he said. “We can stop it from getting worse.” https://www.reuters.com/world/us/biden-renews-focus-domestic-issues-with-tour-new-york-area-flood-damage-2021-09-07

The White House late Sunday said Biden had approved U.S disaster funding to help California in the wake of the Caldor Fire, which has been burning since mid-August in the Sierra Nevada range. The president had ordered other federal assistance earlier this month after declaring the situation an emergency.

After viewing the fire damage, Biden will head to Long Beach to take part in an event with Newsom, an ally who is fighting to survive a Republican-led recall. Biden’s presence is meant to help mobilize Democrats to come out to the polls and secure Democratic leadership of the nation’s most-populous state. https://www.reuters.com/world/us/biden-stump-with-california-governor-against-republican-backed-recall-2021-09-09

Democrats outnumber Republicans in California and recent polling shows a majority of likely voters opposing the recall, but Biden and Newsom are not taking anything for granted.

Vice President Kamala Harris, a former U.S. senator from California, campaigned for Newsom last week and painted the recall, which is backed financially by state and national Republican groups, as part of a broader Republican effort to expand conservative restrictions on voting, abortion and LGBTQ rights. https://www.reuters.com/world/us/us-vp-harris-rallies-california-governor-facing-recall-2021-09-08

On Tuesday, Biden will turn his focus to infrastructure during a stop in Denver where he will tout multitrillion-dollar legislation he is seeking to repair U.S. roads and bridges along with a swath of other domestic policy priorities.

One of the bills faces roadblocks within his own party. U.S. Senator Joe Manchin said on Sunday that lawmakers were unlikely to pass a $3.5 trillion budget package supported by Democrats by a Sept. 27 deadline, but added he could support a smaller $1 trillion to $1.5 trillion bill. Manchin’s backing is critical as Democrats need all of their members in the evenly split Senate to support the spending measure.

During a trip on Saturday to commemorate the 20th anniversary of the Sept. 11 attacks, Biden expressed optimism that the bills would pass.

“I think we’re going to get major pieces of legislation through, both on a bipartisan basis,” he told reporters in Shanksville, Pennsylvania.