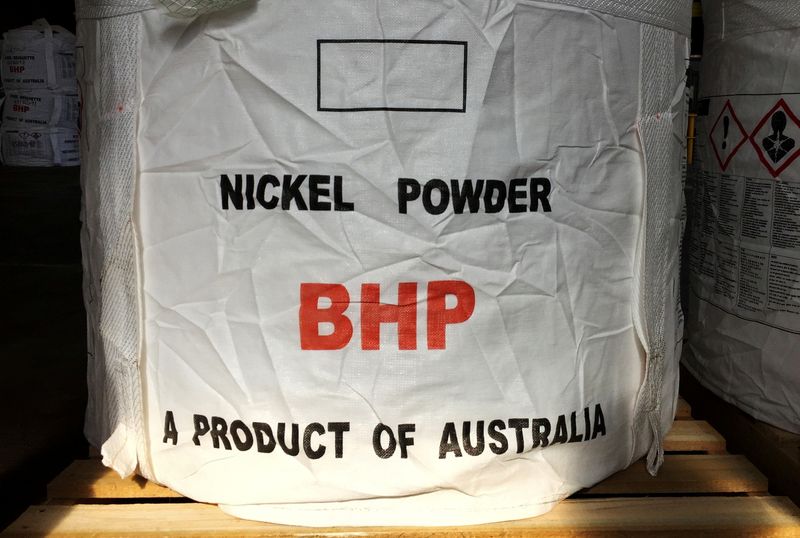 © Reuters. FILE PHOTO: A tonne of nickel powder made by BHP Group sits in a warehouse at its Nickel West division, south of Perth, Australia August 2, 2019. REUTERS/Melanie Burton


MELBOURNE (Reuters) – BHP Group (NYSE:) will team up with billionaire-backed AI exploration firm KoBold Metals to look for battery minerals like and nickel in Australia and other global locations, the companies said on Wednesday.

The world’s largest miner is building out its portfolio in what it calls “future facing commodities”, expecting demand for electric vehicles and green energy to determine the minerals that will drive profits in coming years.

Miners have been moving towards machine learning to find underground deposits in recent years, leading to some big discoveries, such as Rio Tinto (NYSE:)’s copper project Winu.

“Globally, shallow ore deposits have largely been discovered, and remaining resources are likely deeper underground and harder to see from the surface,” said Keenan Jennings, vice-president of BHP Metals Exploration.

“We need new approaches to find the next generation of essential minerals, and this alliance will combine historical data, artificial intelligence, and geoscience expertise to uncover what has previously been hidden,” he said.

“Exploration success rates have been declining over the last couple of decades … because the easy things have been found,” House said.

“That’s the area that is very poorly explored (and) is likely to host a tremendous number of ore bodies.”

KoBold has a dozen tie-ups across about 20 locations including Sub-Saharan Africa, North America and Australia, looking for copper, cobalt, nickel and lithium, House said.

Australia has some of the world’s best mapping data for prospective minerals, while its solid regulatory environment also make it an attractive destination, House said.

KoBold, however, said it is closely watching development of a bill to protect Aboriginal heritage in Western Australia. Indigenous groups have protested a draft of the bill because it denies them final say-so over protection of their sacred sites, which could become a governance issue for miners and investors.

KoBold is planning to set up an Australian office in the next 12 months and is looking for other exploration partners.

“Inside the area of interest we are exclusive for BHP, but outside we are open for business.”