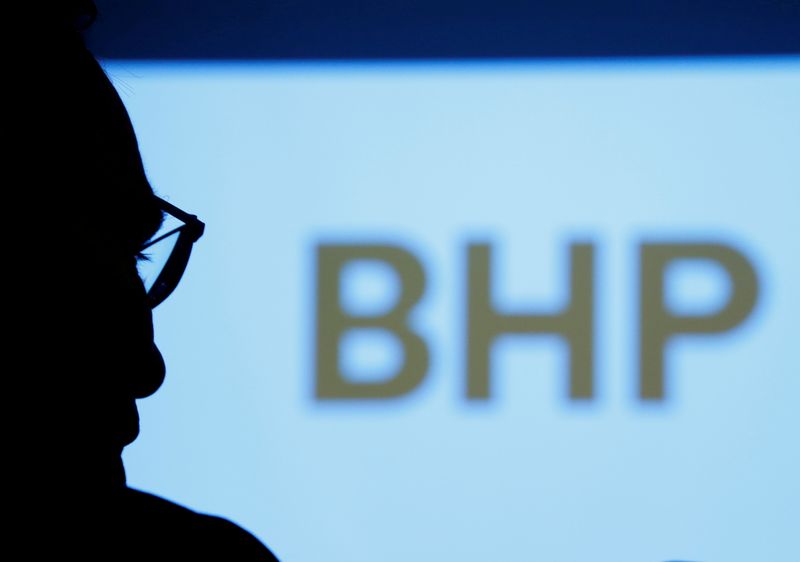 © Reuters. FILE PHOTO: BHP’s logo is projected on a screen during a round-table meeting with journalists in Tokyo, Japan, June 5, 2017. REUTERS/Kim Kyung-Hoon/File Photo

MELBOURNE (Reuters) – BHP Group (NYSE:) will transfer a smaller-than-expected $3.9 billion in oil and gas decommissioning liabilities to Woodside (OTC:) when it merges its petroleum business with the independent Australian gas producer.

Woodside’s shares jumped 6.5% after the figure was disclosed in BHP’s annual report on Tuesday, outperforming gains of around 4% among its peers.

“The long awaited BHPP (BHP Petroleum) abandonment provision number has been released, coming in below what we feared it could be,” Credit Suisse (SIX:) analyst Saul Kavonic said in a note.

BHP said in its annual report that as of June 2021, its petroleum assets included “property plant and equipment and closure and rehabilitation provisions of approximately $11.9 billion and $3.9 billion, respectively”.

When the merger was announced in August, investors had raised concerns as Woodside declined to reveal the rehabilitation liabilities that were assumed in setting the deal terms with BHP’s petroleum business to create a global top-10 independent oil and gas company.

Kavonic said he had assumed Woodside might inherit as much as $5 billion to $7 billion in decommissioning liabilities in the merger with BHP’s petroleum arm, which comprises assets in Australia, the Gulf of Mexico, Trinidad and Tobago, and Algeria.

Once tax offsets are taken into account, the actual decommissioning cost may be below $1 billion, Kavonic said, adding that those costs could be deferred through reusing sites for activities such as carbon capture and storage or offshore wind in the future.