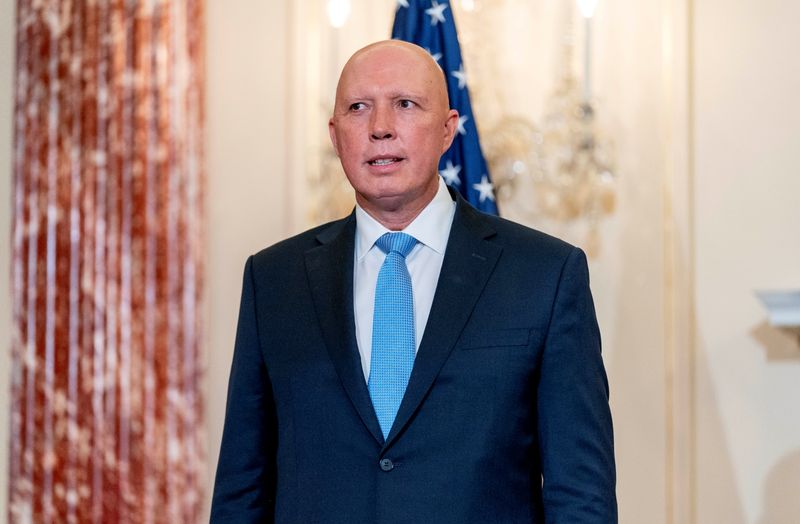 
By Daphne Psaledakis and David Brunnstrom

WASHINGTON (Reuters) – Australia and the United States announced expanded military cooperation on Thursday, including rotational deployments of all types of U.S. military aircraft to Australia, a day after announcing a submarine deal denounced by China as intensifying a regional arms race. https://www.reuters.com/world/asia-pacific/australia-get-us-nuclear-submarine-technology-china-looms-large-2021-09-15

Speaking after meetings between the U.S. and Australian foreign and defense ministers, Australian Defence Minister Peter Dutton said the two sides would be “significantly enhancing our force posture cooperation, increasing interoperability and deepening alliance activities in the Indo-Pacific.”

“This will include greater air cooperation through rotational deployments of all types of U.S. military aircraft to Australia,” Dutton told a joint news conference in Washington.

U.S. Secretary of Defense Lloyd Austin said the meeting had endorsed “major force-posture initiatives that will expand our access and presence in Australia.”

On Wednesday, the United States and Britain said they would provide Australia with the technology and capability to deploy nuclear-powered submarines.

The United States and its allies are looking for ways to push back against China’s growing power and influence, particularly its military buildup, pressure on Taiwan and deployments in the contested South China Sea.

The White House defended the U.S. decision to provide Australia with advanced technology for nuclear-powered submarines, rejecting criticism from both China and France.

White House spokeswoman Jen Psaki said the agreement was not aimed at China, although the United States has mounting concerns about Chinese influence in the Indo-Pacific and regional analysts said the deal is clearly a response to Beijing’s growing strength.

“We do not seek conflict with China,” Psaki told reporters.

The submarine agreement meant the scrapping of a $40 billion deal for conventional French-designed submarines, leading to an angry response from France, which called it a “stab in the back.”

At the news conference U.S. Secretary of State Antony Blinken called France a “vital partner” in the Indo-Pacific and said Washington would continue to cooperate with Paris, comments that appeared aimed at calming French anger.

“We cooperate incredibly closely with France on many shared priorities in the Indo-Pacific but also beyond around the world. We’re going to continue to do so. We place fundamental value on that relationship, on that partnership,” Blinken said.

Blinken said the United States had been in touch with French counterparts in the last 24-48 hours to discuss the new partnership with Australia.

Psaki said France was “aware in advance” of the deal.

The French embassy in Washington confirmed a New York Times report that in protest, it had canceled a gala event on Friday commemorating the “240th Anniversary of the Battle of the Capes,” and France’s top naval officer, who had traveled to Washington for the event celebrating French in America’s war of independence, would return early to Paris.

Ambassador Philippe Etienne told CNN “we were not informed until we saw the first news yesterday morning in Australia and also in the U.S.”

The nuclear-powered submarines will allow Australia to operate throughout the region and for longer periods than those involved in the French deal, military analysts said.

Dutton said the nuclear-powered option France had was “not superior” to that operated by Britain and the United States.

“In the end, the decision that we’ve made is based on what is in the best interest of our national security, and … security and peace within the Indo-Pacific,” he said.

Dutton said there would be more bilateral exercises “and greater combined exercise engagement with partners in the region.”