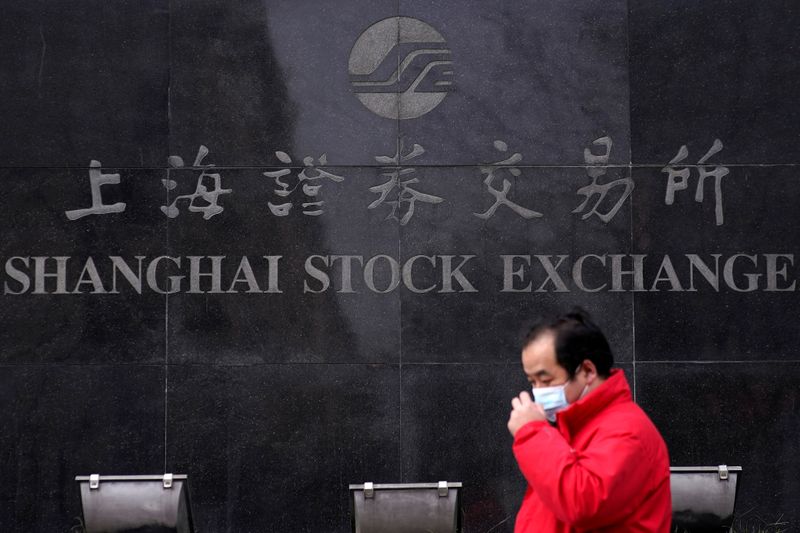 © Reuters. FILE PHOTO: A men wearing a mask walk at the Shanghai Stock Exchange building at the Pudong financial district in Shanghai, China, as the country is hit by an outbreak of a new coronavirus, February 3, 2020. REUTERS/Aly Song

HONG KONG (Reuters) – Asian shares rallied on Friday after two days of losses, but were still in a nervous mood as global investors grapple with how best to interpret central banks’ cautious moves to end stimulus, which also left currency markets quiet.

MSCI’s broadest index of Asia-Pacific shares outside Japan, gained 0.47% in early trading, but is still down around 0.8% compared to last week’s close, in line with the global trend.

But gains were lead by Hong Kong with the local benchmark rebounding 1.5% having fallen over 2% the day before when Chinese tech stocks took another battering after authorities called gaming firms in for a word. But traders are still cautious about buying too much of the dip.

“At some point in time investors will say actually this is the right price, it’s not going to go to zero,” said John Lau, head of Asian equities and a senior portfolio manager at SEI, referring to Chinese tech names.

“I think most investors will wait until the dust settles and see whether is there is enough clarity before they can act, at this point in time its extremely difficult.”

Reaction to the European Central Bank saying over the coming quarter it would slow emergency bond purchases implemented during the COVID-19 pandemic was constrained by the ECB refraining from detailing how it plans to end its 1.85-trillion-euro Pandemic Emergency Purchase Programme.

“Risk sentiment flip-flopped through the overnight session, initially reacting positively to the ECB meeting and evidence of ongoing strength in the U.S. labour market. However, U.S. equities ended in the red, likely reflecting concerns about the timing of central bank tapering and ongoing Delta woes,” said analysts at ANZ.

Investors normally interpret better employment figures as a sign the Federal Reserve is less likely to delay trimming its massive asset purchases, which have been supporting share prices in recent months.

In addition, Federal Reserve Bank Governor Michelle Bowman added her voice to the growing number of policymakers who say the weak August jobs report likely won’t throw off the central bank’s plan to trim its $120 billion in monthly bond purchases later this year.

In currency markets, the euro was flat in Asian hours at $1.1820, after the ECB announcement helped it stem a few days of losses, as it fell off its month high set at the end of last week.

The dollar was also little changed against a basket of peers but on course for nearly a 0.5% weekly rise.