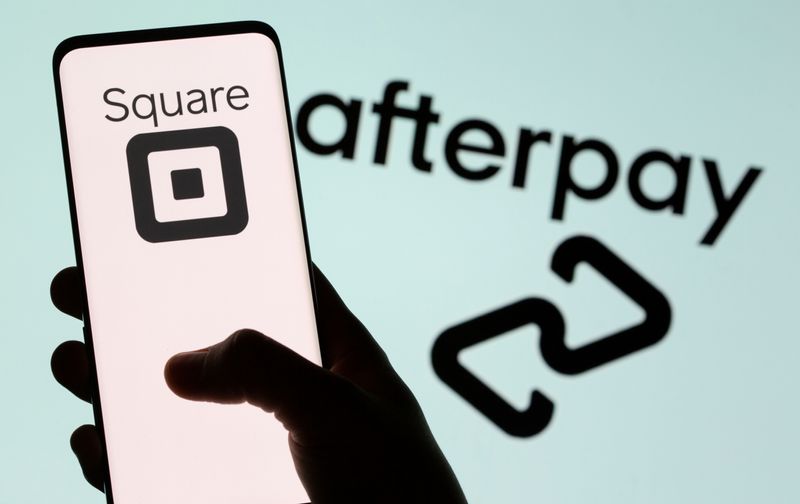 © Reuters. Smartphone with Square logo is seen in front of displayed Afterpay logo in this illustration taken, August 2, 2021. REUTERS/Dado Ruvic/Illustration

(Reuters) – A third of U.S. consumers who used “buy now, pay later” services have fallen behind on one or more payments, and 72% of those said their credit score declined, a new study published by personal finance company Credit Karma showed.

The study, conducted by software firm Qualtrics, surveyed 1,044 adult consumers in the United States last month to measure their interest in buy now pay later (BNPL) and found 44% had used these services before.

The usage figure was slightly up from a similar survey conducted by Credit Karma for Reuters in December, while missed payments was down from 38%.

The latest survey found younger consumers were more likely to miss payments. More than half of Gen Z or millennial respondents– those born between the early 1980s and mid-to-late 1990s– said they had missed at least one payment. That compares with 22% of Gen X, who were born in the early 1960s to early 1980s, and 10% of Baby Boomers, those born between the mid-1940s and 1980.

There has been a surge in usage of BNPL services, which allow consumers to easily split payments for purchases into installments. The boom in volumes by providers such as Klarna, Affirm Holdings, AfterPay Ltd and PayPal Holdings Inc (NASDAQ:), has been driven in part by online shopping growth during the coronavirus pandemic.

The growth has also led to more scrutiny from regulators who aim to ensure consumers do not take on more debt than they can handle.

“It’s easier than ever to purchase an item — and finance it — without even thinking about the implications of the purchase,” said Colleen McCreary, financial advocate at Credit Karma. “It’s this disconnect between making a purchase and actually paying for it where consumers can get in trouble.”