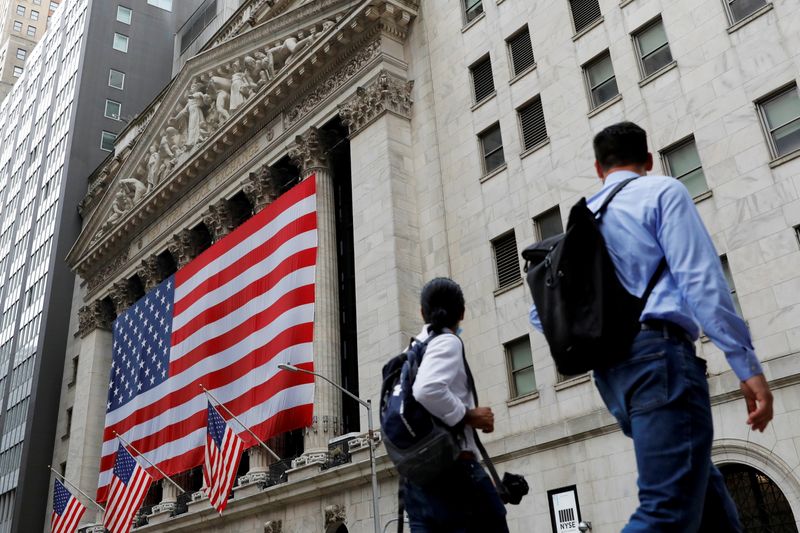 By David Randall and Lewis Krauskopf

NEW YORK (Reuters) – Investors are ramping up their focus on Washington, as the twin prospects of a tax hike and a potentially prolonged fight over raising the debt ceiling loom over a rally in U.S. stocks.

Democrats in the U.S. House of Representatives on Monday proposed raising the top tax rate on corporations to 26.5% from the current 21%, and increasing income and capital gains taxes on individuals making above $400,000 as part of a plan to rollback former President Donald Trump’s signature tax bill passed in 2017.

Those measures could spell trouble for sectors such as technology and healthcare, where many investors are likely sitting on outsized capital gains, while also leading to tax-motivated selling near the end of the year as households attempt to lock in lower capital gains rates, said Margaret Patel, senior portfolio manager at Wells Fargo (NYSE:).

“This will have to come out of stock market valuations, there’s no two ways about it,” she said.

If Congress fails to raise the $28.5 trillion debt limit, meanwhile, it could lead the government to default on its payment obligations.

Most analysts believe such an outcome is unlikely, but worries are likely to increase if a deal isn’t reached soon. U.S. Treasury Secretary Janet Yellen warned earlier this month that cash and “extraordinary measures” being used to finance the government temporarily will be “exhausted” during October.

Developments in Washington may add yet another challenge to a rally in U.S. stocks that has so far rolled on despite worries over everything from a COVID-19 resurgence to surging inflation, bringing the to a roughly 19% gain this year and a near double from its March 2020 lows.

Still, some analysts have already started factoring taxation into their calculus on company earnings.

Jonathan Golub, chief U.S. Equity strategist at Credit Suisse (SIX:), cited the likelihood of higher taxes as one factor in his decision in late August to lower his forward price to earnings estimate for the S&P 500 from 21.4 to 20, reflecting a $10 hit to earnings per share of the index for 2022.

Goldman Sachs (NYSE:), meanwhile, cut its earnings per share estimates for the S&P 500 by 5% on Monday based on the assumption that the corporate tax rate will rise to 25%, slightly below the 26.5% proposed by House Democrats.

More broadly, a bevy of Wall Street banks have recently warned that the market is due for a pullback, citing worries over everything from valuations to ebbing growth.

At the same time, investors are also gauging the odds of a nasty debt ceiling fight.

“It is an under-appreciated risk by the markets and it is probably one of the bigger potential volatility catalysts we see here in the next couple of months,” said Mike Stritch, chief investment officer at BMO Wealth Management.

Many are mindful of 2011, when the United States on Aug. 5 lost its top-tier AAA credit rating from Standard & Poor’s after a fierce political battle over the debt limit, contributing to a 17% drop in the S&P 500 from early July through early August of that year.

Political wrangling in October 2013, which led to a government shutdown, also jostled stocks, with the S&P 500 falling about 4% over a few weeks before bouncing back.

Democrats, who are trying to enact a $3.5 trillion domestic investment plan, hold only a slim edge in Congress. The Senate is effectively split 50-50, with Democrats holding the majority due to Vice President Kamala Harris’ tie-breaking vote, while Democrats hold 220 seats in the House of Representatives compared to 212 for Republicans.

“There are a lot of balls to juggle here over the next several weeks and I don’t think the equity market has really priced in the potential risk,” James Ragan, director of wealth management research at D.A. Davidson.

There’s more to DeFi than just providing liquidity By Cointelegraph