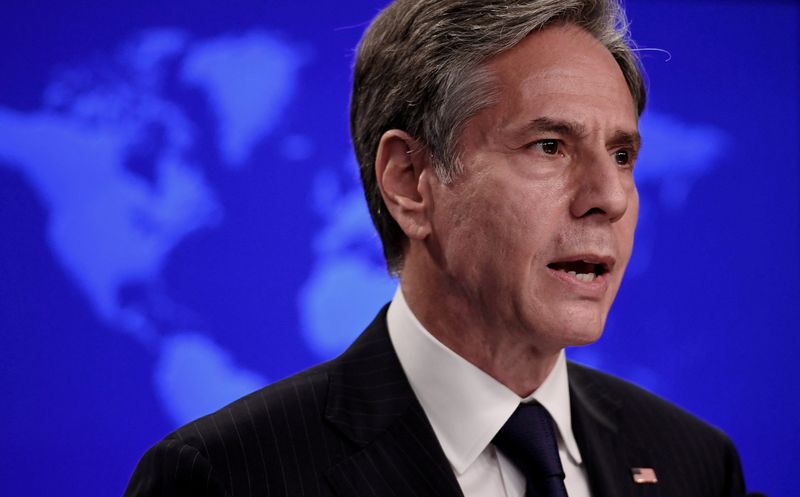 WASHINGTON (Reuters) – A week after declaring America’s “new chapter” of engagement with Afghanistan, U.S. Secretary of State Antony Blinken will aim to form a united front with allies this week on how to tackle the Taliban and ensure continued support for U.S. bid to help evacuate Americans and at-risk Afghans who remained behind.

In a trip to Qatar and Germany, Blinken will be overlapping with Defense Secretary Lloyd Austin who is also departing on Sunday for a wider Gulf visit covering Saudi Arabia, Qatar, Bahrain and Kuwait.

The visit by top two U.S. national security officials comes as the Biden administration still grapples with the fallout from what is widely seen as a messy U.S. withdrawal from Afghanistan, criticized by President Joe Biden’s fellow Democrats, as well as Republicans.

Dubbed as a “thank you” tour to the Gulf countries and Germany, who were instrumental in helping Washington evacuate thousands of people out of Kabul, Blinken will meet with senior Qatari officials in Doha and German Foreign Minister Heiko Maas at Ramstein air base, where he will also co-host a ministerial meeting on Afghanistan.

Neither Blinken nor Austin are expected to meet with members of the Taliban, U.S. officials said.

The United States’ two decades-long invasion in Afghanistan culminated with a hastily organized airlift that left thousands of U.S.-allied Afghans behind and was punctuated by a suicide bombing outside Kabul’s airport that killed 13 U.S. troops and scores of Afghans. Washington completed the withdrawal on Aug. 31.

It was one of the largest airlifts in history, evacuating more than 120,000 Americans, Afghans and others, although thousands of at-risk Afghans and about 100 U.S. citizens still remained behind. Blinken has vowed to continue efforts to get them out and also hold Taliban to its commitments of providing safe passage to anyone who wishes to leave.

“We’re in very, very active coordination with like-minded countries around the world so that … we continue to work together and use the leverage and influence we have to hold the Taliban to the commitments it’s made,” Blinken told a press conference at the State Department on Friday.

In Qatar, which has been at the forefront of the world’s engagement with the Taliban and is also now the home to the U.S. mission covering Afghanistan, Blinken is also expected to get together with U.S. diplomats working on Afghanistan, now that Washington has moved its mission from Kabul to Doha.

The United States and the Western countries are in a difficult balancing act in the aftermath of Taliban’s lighting victory – reluctant to recognize the Islamist group while accepting the reality that they will have to engage with the group to prevent a looming humanitarian crisis in the country.

A key element to ensure that aid flows into Afghanistan is to have a full reopening of the Kabul airport, the war-struck country’s main gateway to the world. Qatar has also been front and center in negotiations over the future of the airport.

On Saturday, a technical team from Qatar reopened the Kabul airport for aid and domestic services. But talks to resume international flights and security of the airport has continued between Qatar, the Taliban and Turkey.

Washington is not a direct party in the talks over the airport but is keen to see the airport functioning.

At Ramstein, Blinken will also visit a transit hub, through which around 30,000 evacuees have passed during the evacuation and which was still housing more than 17,000 people as of Friday, U.S. officials said.

“This (trip) is very much focused on our relationship with Qatar, thanking them for the incredible support that they’ve given, as well as on the German side. That’ll be a fundamental message throughout the trip,” Acting Assistant Secretary for South and Central Asian Affairs Dean Thompson told a briefing.