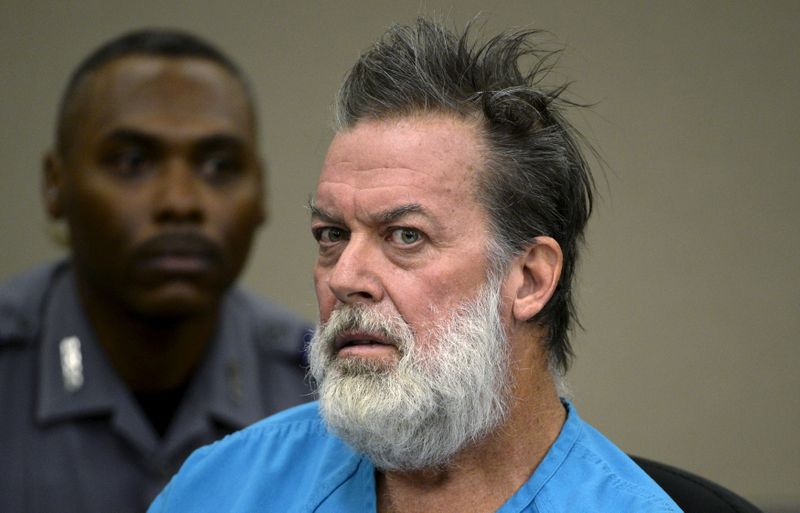 DENVER (Reuters) – The man accused of killing three people at a Colorado abortion clinic in 2015 was declared on Thursday to be mentally unfit for trial on federal charges for the shootings, the same conclusion a state court judge reached in likewise ruling him incompetent.

Dear stormed a Planned Parenthood clinic in Colorado Springs on Nov. 27, 2015, opening fire with a rifle outside before charging into the building in a rampage that left three people dead, including a police officer, and nine people wounded before the siege ended five hours later with his surrender.

Dear has admitted to the shootings in several state court hearings, including one outburst in which he proclaimed himself “a warrior for the babies,” a reference to his anti-abortion beliefs.

After evaluating Dear in 2016, two state court-appointed psychologists diagnosed him with a paranoid delusional disorder that they said rendered him mentally unfit for trial. The state court judge then ruled him incompetent, finding that while Dear could comprehend the factual basis of the case, he was unable to meaningfully assist in his own defense.

In 2019, Dear was indicted in federal court, which prosecutors hoped might advance the case, but Thursday’s ruling by U.S. District Judge Robert Blackburn put any prosecution of Dear in further doubt.

In a three-page written order, Blackburn said he relied heavily on findings from a forensic evaluation conducted by a court-appointed psychologist.

Blackburn said Dear suffers from an unspecified mental disease that makes him incapable of grasping “the nature and consequences” of the criminal proceedings, and thus unfit to meaningfully assist in his defense or act as his own attorney.

Dear interrupted the hearing at point, shouting, “I’m opposing it; I’m not crazy,” according an account published by the Denver Post.

A federal indictment charged Dear with 65 counts of violating the Freedom of Access to Clinic Entrances (FACE) Act, plus three counts of using a firearm in an act of violence resulting in murder – a capital offense.

A spokesman for U.S. Attorney’s Office in Denver said prosecutors had no comment on the ruling. The federal public defenders’ office does not comment publicly on its cases.

In state court, Dear faces 179 criminal counts, including first-degree murder in the deaths of three people and multiple counts of attempted murder and assault.