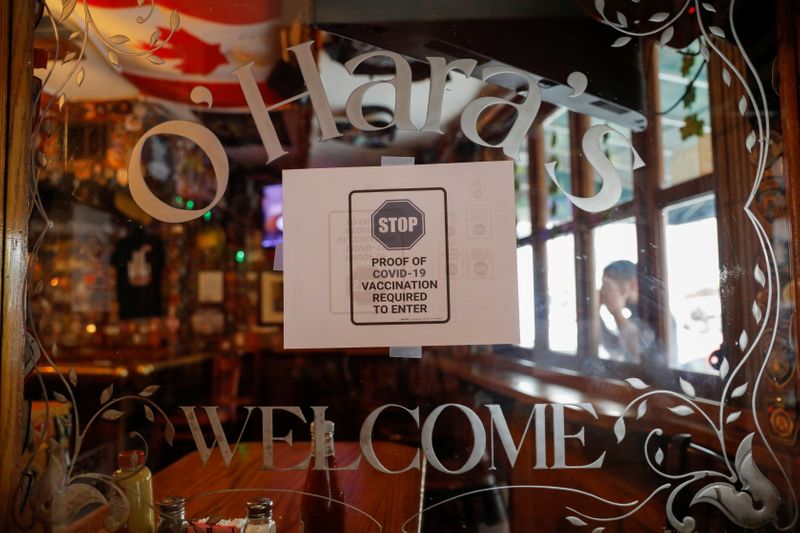 © Reuters. Signage is seen in the entrance of O’Hara’s, a bar near the World Trade Center, as the vaccine mandate commenced during the outbreak of the coronavirus disease (COVID-19) in Manhattan, New York City, U.S., August 17, 2021. REUTERS/Andrew Kelly

By Timothy Aeppel and Jarrett Renshaw

(Reuters) – Big names in Corporate America including Amazon.com Inc (NASDAQ:) cheered U.S. President Joe Biden as he mandated employees either get vaccinated or be tested regularly, but some mid-sized companies worried that the plan would be tough to carry out and unpopular with a slice of their workers.

Earlier on Thursday, Biden took aim at vaccine resistance in America, announcing policies requiring most federal employees to get COVID-19 vaccines and large employers to ensure their workers are vaccinated or tested weekly.

The new measures https://www.reuters.com/world/us/bidens-new-covid-19-plan-includes-vaccine-test-mandates-2021-09-09/?enowpopup would apply to about two-thirds of all U.S. employees, who work for businesses with more than 100 workers.

Much of Corporate America was silent as it digested the news. A few household names such as Amazon supported Biden, and Microsoft Corp (NASDAQ:) and Facebook Inc (NASDAQ:) said they already required vaccines for those entering U.S. offices.

But some mid-sized companies worried about losing employees at a time when they are trying to grow business.

Stephen Bullock, chief executive of Power Curbers Companies in Salisbury, North Carolina, said he was still reeling from the implications.

“We have encouraged, cajoled, and educated our staff,” he said, but only 40% of his workforce have received the shot. “We have a segment of our workforce that will not get the vaccine under any circumstance.”

His 125-employee company builds equipment used to lay curbs and other concrete products. Business is strong, he said, citing four job vacancies on the factory floor. Bullock worries that the Biden mandate could prompt some workers to jump ship and join smaller companies not subject to the rule.

“To some degree, this does take some of the heat off,” he said, when asked whether he could just blame distant politicians for something he was already trying to push. “But it also introduces some logistical challenges.”

Bullock wonders how his company will verify the testing, schedule it, and deal with the cost.

Most fence-sitters already have opted to get the vaccine, he said. “But maybe having that swab shoved up your nostrils (in order to be tested) for several weeks will bring some holdouts over to be vaccinated.”

The National Association of Manufacturers, the largest such U.S. industry group, said getting eligible Americans vaccinated was an ‘economic imperative’ and it would work with the administration to make sure a mandate did not disrupt operations.

“It is important that undue compliance costs do not burden manufacturers, large and small alike,” President and CEO Jay Timmons said in a statement.

“It really puts me in an awkward position,” he said. “I am pro-vaccine, but also pro-people’s rights. It would really depend on what they do if we don’t comply. Are they shutting us down? A financial penalty? A slap on the wrist?”

“I’m not a fan of the federal government mandating anything,” he said. “This is not the bubonic plague. This is not typhoid – and they seem to be treating it like it is.”

Baker’s company has 150 employees spread between two factories, and he estimated 70% to 75% of his workers were vaccinated. Many of those unvaccinated workers will finally agree to get the shot, just to avoid the hassle of regular testing, he said.

“But it wouldn’t surprise me if the others look for an employer who doesn’t have 100 employees – and that’s a huge issue for me, especially in this competitive job market.”