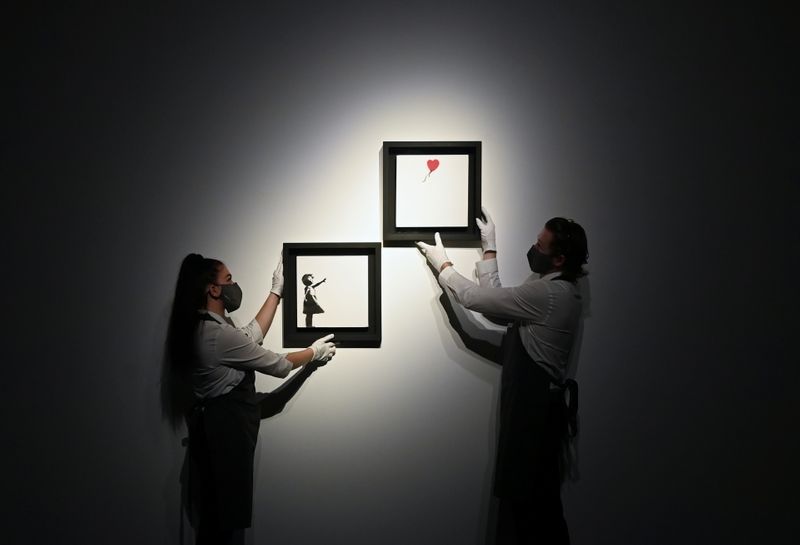 LONDON (Reuters) – A Banksy picture which was half sliced by a shredder concealed in its frame when it was sold at auction, will go under the hammer in London on Thursday with a price estimate of up to $8.2 million.

Onlookers gasped when the then-titled “Girl with Balloon” was sucked into a shredder as the hammer fell following a bid of 1,042,000 pounds at an October 2018 auction at Sotheby’s in London.

the street artist, whose identity is a closely guarded secret, said on Instagram in 2018.

Sotheby’s said the work fitted into an illustrious history of anti-art including Marcel Duchamp’s anonymous submission of Fountain, a porcelain urinal remounted on a pedestal in 1917, to Ai Weiwei, who photographed himself intentionally dropping an alleged Han Dynasty urn.

“When Girl with Balloon ‘self-destructed’ in our saleroom, Banksy sparked a global sensation that has since become a cultural phenomenon,” said Alex Branczik, Sotheby’s chairman of modern and contemporary art

“During that memorable night, Banksy did not so much destroy an artwork by shredding it, but instead created one. Today this piece is considered heir to a venerated legacy of anti-establishment art.”

Washington subway to continue reduced service through at least Nov. 15