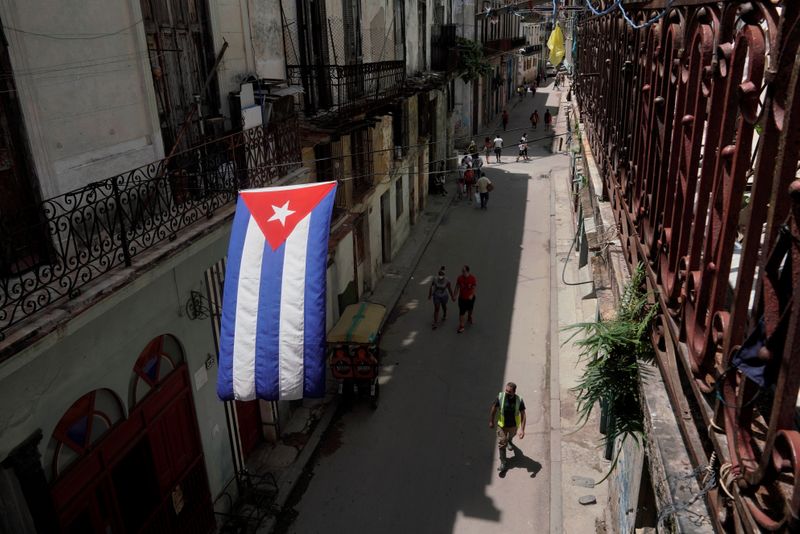 WASHINGTON (Reuters) – The Biden administration plans to announce U.S. sanctions on Thursday against several Cuban officials over their role in a crackdown on anti-government protests earlier this month, people familiar with the matter said.

The sanctions are expected to be imposed on security force officials accused of human rights abuses against activists who took part in the biggest protests of their kind in decades in the Communist-ruled island, the two sources told Reuters.

It will mark the first concrete steps by President Joe Biden’s administration to apply pressure on the Cuban government as Washington faces calls from U.S. lawmakers and the Cuban-American community to show greater support for the protesters.

The speed with which the administration has crafted new sanctions further signals Biden is highly unlikely to soften the U.S. approach to Cuba anytime soon after his predecessor, Donald Trump, rolled back a historic Obama-era détente with Havana.

Thousands of Cubans staged spontaneous anti-government protests a week ago to demonstrate against an economic crisis that has brought shortages of basic goods and power outages. They were also protesting the government’s handling of the coronavirus pandemic and curbs on civil liberties. Scores of activists were detained.

Biden had promised during the 2020 presidential campaign to reverse some of Trump’s anti-Cuba policies, but Thursday’s announcement suggests little appetite for a return to rapprochement.

At the same time, however, senior U.S. officials have told Reuters that the administration is still seeking ways to ease the humanitarian plight of the Cuban people while keeping pressure on the Cuban government.

The White House said on Tuesday that Biden would form a working group to examine remittances to Cuba in the wake of the protests on the island. The aim is to determine how Cuban-Americans can send money to families on the island while keeping the funds out of Cuban government coffers.

Trump had imposed severe restrictions on the flow of remittances, which are believed to have previously amounted to several billions of dollars annually.

The United States is also working with the private sector and Congress to look for ways to make the internet more accessible to the people of Cuba, U.S. State Department spokesman Ned Price told a regular news briefing on Tuesday.

Price made the comment while calling on the Cuban government to restore full internet and telecommunications to Cubans following a wave of anti-government protests.