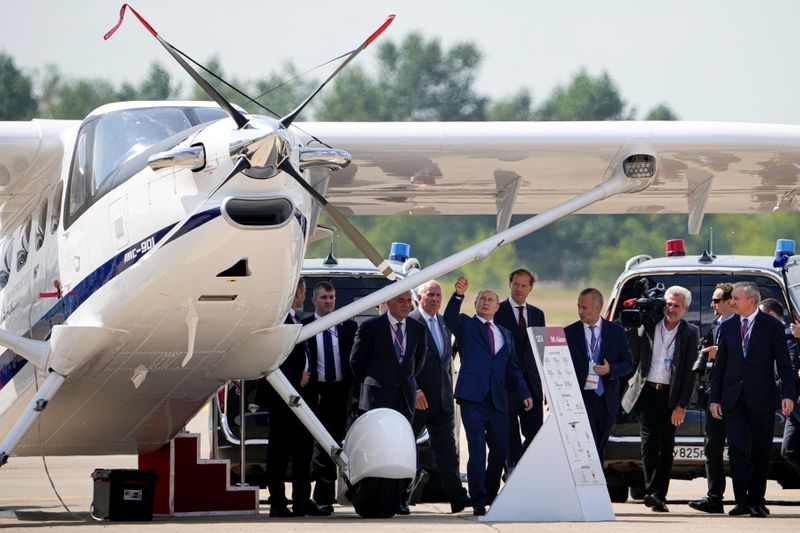 MOSCOW (Reuters) – Russia’s airlines struck deals for more than 80 regional jets at its flagship airshow this week, according to state-backed aerospace and leasing companies, as carriers bet on a partial market recovery driven by domestic flights.

Russia, like other countries, has heavily restricted international air traffic due to the coronavirus since last year, but domestic flight routes are already recovering.

State-owned companies backed by state leasing companies dominated the ranks of buyers and sellers at the MAKS-2021 biennial airshow that opened on Tuesday near Moscow.

The domestically-made Superjet is a regional aircraft that entered service in 2011.

State-run Red Wings signed an agreement for the delivery of 25 Superjet planes; private airline Azimuth and Aurora, which the government wants to turn into a far east regional carrier, signed agreements for the delivery of 10 and eight of the planes, respectively, UAC said.

Flag carrier Aeroflot’s Rossiya subsidiary ordered 15 Superjets. The deals point to the rising role of the aircraft on regional Russian routes. The aircraft is only used by Russian airlines and has struggled to find foreign buyers.

Azimuth also ordered six Airbus A220-300 jets on Wednesday, with deliveries set to begin next year.

Mikhail Ganelin, a senior analyst at Aton, said it could be profitable for airlines to acquire Russian regional aircraft because of favourable terms offered by state leasing companies and subsidies for flights that don’t pass through Moscow.

“The crisis is severe, but the domestic market is very good, it has almost recovered,” he said.

Russian airlines lost half of their revenue last year. But domestic flights have helped to start a recovery, with local routes almost reaching 2019 levels between January and May and since then even exceeding those levels.

Total passenger traffic, including international flights, is still far from pre-crisis levels, however. It was down by almost a quarter in January-June compared with 2019.