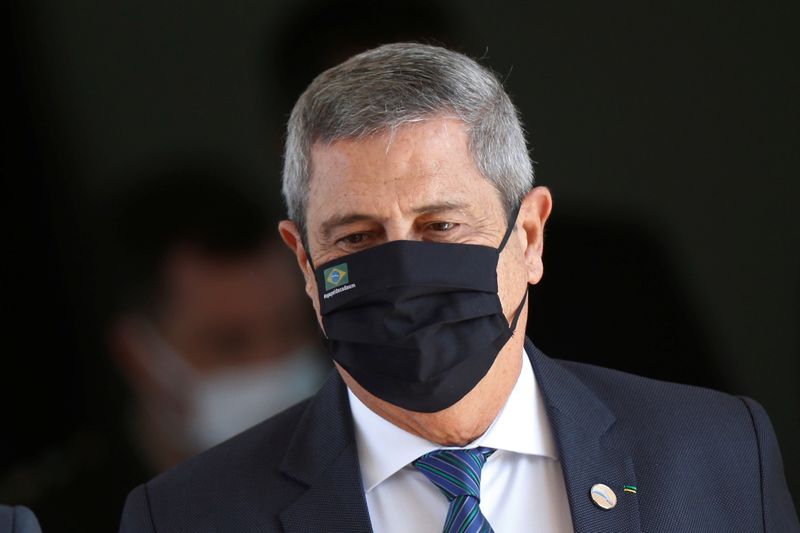 BRASILIA (Reuters) – Brazilian politicians across the ideological spectrum expressed shock on Wednesday at an unconfirmed report in newspaper Estado de S.Paulo that the defense minister communicated to the speaker of the lower house that next year’s scheduled presidential election would not take place without printed ballots.

The report, which cited anonymous sources and which Reuters was unable to independently verify, comes after repeated public allegations by President Jair Bolsonaro that Brazil’s electronic voting system is vulnerable to fraud. He has provided no proof for those claims.

Estado de S. Paulo reported that Defense Minister Walter Braga Netto, an army general, delivered through an interlocutor a message to House Speaker Arthur Lira that the 2022 presidential election must use printed votes.

Both Lira and Braga Netto denied the report, calling it a “lie.”

Braga Netto, speaking at an event in Brasilia, said the armed forces were committed to democracy and freedom.

Bolsonaro has said https://www.reuters.com/world/americas/brazils-bolsonaro-says-may-not-accept-2022-election-under-current-voting-system-2021-07-07 he may not accept the result of an election using electronic voting in 2022. He is trying to push a bill for printed ballots through Congress.

The Estado de S.Paulo report has sent shockwaves through Brazil, where a coup in 1964 led to 21 years of military rule.

“In a democracy, it is not the military who decides if there will or will not be an election but the constitution which they have sworn to defend and obey,” said lawmaker Marcelo Ramos, vice-president of the lower house, in a note.

Senate president Rodrigo Pacheco said on Twitter that Congress is yet to decide if the voting system will change but assured Brazilians that the 2022 election will take place, no matter if with printed or electronic ballots.

Former speaker Rodrigo Maia wrote on Twitter that “Brazil awaits a statement from the minister of defense and commanders of the Armed Forces about today’s grave report.”

Brazil’s electoral court has repeatedly denied that the system is vulnerable to fraud or that there is evidence of fraud in previous elections.

Festivals for Britain as events get $1 bln COVID reinsurance cover