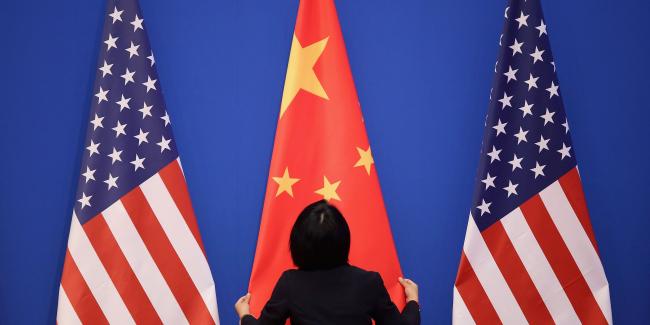 
(Bloomberg) — An agreement by the U.S. and China for their first face-to-face talks between senior diplomats in months represents the latest effort by both sides to keep a growing list of disputes from spiraling out of control.

The nations announced plans Wednesday for Deputy U.S. Secretary of State Wendy Sherman to meet Chinese Foreign Minister Wang Yi next week in the northern port city of Tianjin as part of her current swing through Asia. The trip followed behind-the-scenes wrangling, with the Financial Times reporting earlier that the No. 2 American diplomat had suspended her travel plans after Beijing offered only a meeting with one of Wang’s subordinates.

The decision to compromise on the two-day visit shows the importance both sides put on stabilizing relations before the annual Group of 20 summit in October, which is the most likely opportunity for the first meeting between U.S. President Joe Biden and China’s Xi Jinping. Sherman’s visit would be the highest-level meeting between U.S. and Chinese diplomats since acrimonious talks in Alaska in March, although they’ve since spoken over the phone and U.S. climate envoy John Kerry has held talks with his Chinese counterpart.

“Given that the earlier report of a scrapped China trip was taken as a sign of worsening relations, this development should be taken positively,” said Alvin Tan, head of Asia FX strategy at RBC Capital Markets in Hong Kong. “This is keeping expectations alive of a direct Biden-Xi meeting on the sidelines of the G-20 summit.”

The tussle over the meetings underscores the depth of suspicion between the world’s largest economies as Biden builds a democratic united front to counter Beijing while retaining many of former President Donald Trump’s more confrontational policies. In the past week, the Biden administration has cautioned American businesses against operating in Hong Kong and accused China of masterminding the Microsoft (NASDAQ:) Exchange hack. Sherman, meanwhile, joined her Japanese and South Korean counterparts Wednesday in affirming allied support for stability in the Taiwan Strait.

China on Thursday also gave a full-throated defense of its efforts to look into the origin of coronavirus, rejecting efforts from the World Health Organization to probe whether it leaked from a lab. The Biden administration is currently reviewing that possibility, and has aligned with allies to pressure Beijing into releasing more biological samples and other data from the months before the pandemic shut down the world.

Both Washington and Beijing are seeking to rebalance their relationship, as China amasses greater economic and military might and shows a new willingness to resist foreign criticism of its human rights practices. Introductory talks between U.S. Secretary of State Antony Blinken and a Chinese delegation in Alaska in March descended into bickering, with Politburo member Yang Jiechi saying the top American diplomat’s remarks weren’t “normal.”

“The controversies surrounding protocol details are a sign of how difficult it is for China and the Biden administration to gel,” said Zhu Feng, a professor of international relations at Nanjing University. “The unprecedented attention to such technical details show the Biden administration is trying to re-frame bilateral communication. Of course, China is also standing up. As such, the mutual trust and goodwill is quickly running out.”

The Biden administration appears to have held out to until Sherman secured an audience with Wang, preserving a courtesy granted to previous deputy secretaries of state, including Blinken in 2016. Still, China has paired Sherman up with Vice Foreign Minister Xie Feng, who, while responsible for North American affairs, holds a lower rank in the ministry than his American guest does in the State Department.

Sherman’s three-way talks with her Japanese and South Korean counterparts Wednesday in Tokyo included a discussion on preserving peace in the Taiwan Strait, prompting a rebuke from Beijing. She’ll travel to Oman on Tuesday.

Some in the White House have expressed concern about a lack of access to key Chinese decision-makers. Kurt Campbell, the Biden adminstration’s top official for Asia, has said that even top diplomats were “nowhere near, within a hundred miles” of Xi’s inner circle.

State Department spokesman Ned Price told reporters Wednesday that Sherman’s visit is intended to show China “what healthy and responsible competition looks like” and to make sure that “competition doesn’t veer into conflict” by ensuring there are “guardrails” in the relationship. Price emphasized that Sherman would have “senior-level” communications in China.

But a statement issued by the Chinese Foreign Ministry emphasized that Sherman “will hold talks” with Xie while Wang would “meet her.”

Ryan Hass, a senior fellow at the Brookings Institution, said he expected both the U.S. and China to make sure “forthright” discussion were held. “Given the current stresses in the relationship and the possibility of a meeting between both leaders at the G-20 in October, I suspect both sides decided to turn focus to matters of substance,” he said.