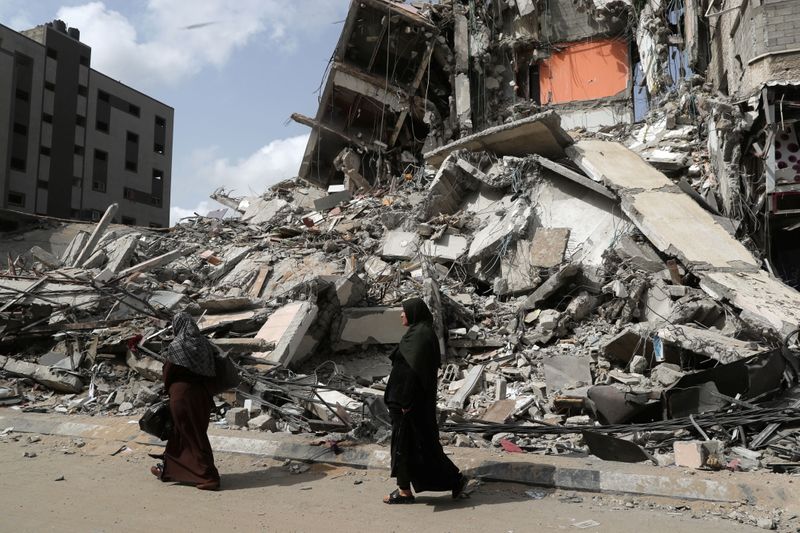 © Reuters. FILE PHOTO: Palestinians walk past the ruins of a building destroyed in an Israeli air strike in the recent cross-border violence between Palestinian militants and Israel, in Gaza May 21, 2021. REUTERS/Suhaib Salem

GENEVA (Reuters) – Former United Nations human rights chief Navi Pillay will head an international commission of inquiry into alleged crimes committed during the latest conflict between Israel and the Islamist group Hamas in Gaza, the U.N.’s Human Rights Council said in a statement on Thursday.

The council agreed in late May to launch the investigation with a broad mandate to probe all alleged violations, not just in Gaza and the Israeli-occupied West Bank, but also in Israel during hostilities that were halted by a May 21 ceasefire.

At least 250 Palestinians and 13 people in Israel were killed in the fierce fighting, which saw Gaza militants fire rockets towards Israeli cities and Israel carry out air strikes across the coastal enclave.

Michelle Bachelet, the U.N. High Commissioner for Human Rights, told the council at the time that deadly Israeli strikes on Gaza might constitute war crimes and that Hamas had violated international humanitarian law by firing rockets into Israel.

Israel rejected the resolution adopted by the Geneva forum at an emergency special session and said it would not cooperate.

Pillay, a former South African judge who served as U.N. High Commissioner for Human Rights from 2008-2014, will lead the three-person panel also composed of Indian expert Miloon Kothari and Australian expert Chris Sidoti, said the statement issued by the Human Rights Council. The investigators, who have been tasked with trying to identify those responsible for violations with a view to ensure they are held accountable, are due to present their first report in June 2022.