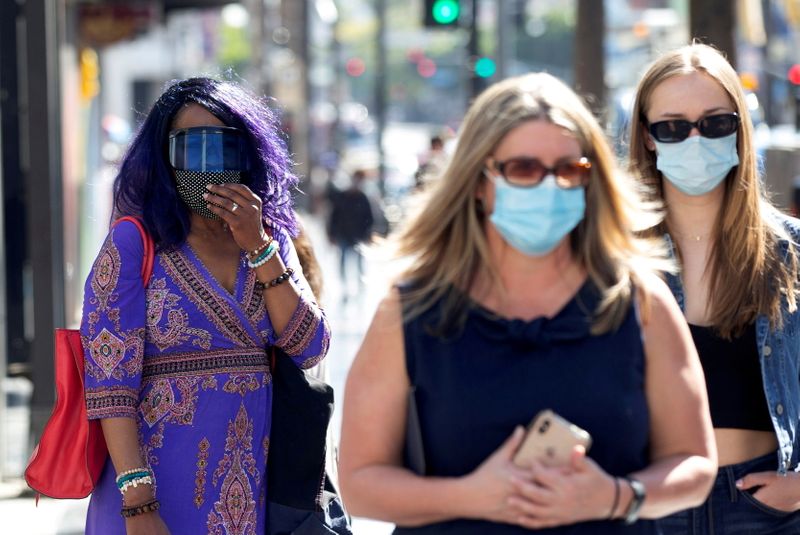 WASHINGTON (Reuters) – Five weeks after dropping its reference to the coronavirus as a weight on the economy, the U.S. Federal Reserve is confronting a challenging new rise in cases that has fueled doubts about the global recovery and is already forcing other central banks to consider retooling their policies.

The daily pace of new infections has more than doubled since the Fed’s June 16 policy meeting, when Chair Jerome Powell said that while it was “premature to declare victory” given the appearance of the more infectious coronavirus Delta variant, a decline in infections, hospitalizations and deaths “should continue.”

It hasn’t, and while the worst current outbreaks have been localized, news of rising case loads once again straining hospital capacity spilled into financial markets with a sharp Monday sell-off.

U.S. Treasury yields have tumbled in a sign investors may be losing confidence in both the U.S. growth outlook and the Fed’s ability to navigate between the shoals of a resurgent pandemic that may require more help from the central bank and high inflation that may demand a more restrictive approach.

Analysts still expect economic growth in 2021 to be the strongest since 1984, but are now again mining real-time data for signs the Delta variant is changing behavior.

“Do vaccinated people stay off airplanes? That is the downside risk,” said Wells Fargo (NYSE:) Corporate and Investment Bank Chief Economist Jay Bryson, who is so far maintaining a forecast of 7% economic growth this year. “I don’t think any of us are expecting lockdowns like we saw a year ago. The population is not going to stand for that. But you don’t have to have lockdowns. You just have to have people saying, ‘I am staying home.'”

No obvious evidence has emerged yet of that happening. Air travel has remained steady at around 80% of its pre-pandemic level, according to Transportation Security Administration statistics, and there’s been no dip in diners returning to restaurants, according to data from restaurant site OpenTable.

Attendance at Major League Baseball games over the seven days through Monday had climbed back to the 2019 average for the first time this year, with stadiums now open to capacity crowds https://tinyurl.com/ymes2ax7.

Yet the Fed’s scheduled meeting next week will be newly complicated, overshadowed by something epidemiologists have warned even as vaccinations rolled out: Coronavirus will not fade easily, and is likely to remain a cyclical risk to people’s health and the economy for years to come.

The Fed in June signaled it had begun planning a shift to post-pandemic monetary policy, with the risk of rising inflation seen as paramount and some policymakers ready to reduce the Fed’s $120 billion in monthly bond purchases and accelerate eventual interest rate hikes.

The Reserve Bank of Australia may offer a note of caution. The bank began its own bond “taper,” only to see the country impose new lockdowns that economist feel will force the RBA to reverse course.

Meanwhile, the Delta variant “could tap the brakes” on the U.S. recovery, Minneapolis Federal Reserve President Neel Kashkari told National Public Radio over the weekend, “which would be a really big setback for us.”

The health policy response to the Delta variant spread has been modest. Los Angeles reinstated an indoor mask mandate. On Monday the American Academy of Pediatrics said schools should open in-person in the fall, but recommended universal masking for staff and children over 2 years old.

Infections and fatalities remain well below last winter’s trauma. New daily cases of around 37,000 are a fraction of the quarter of a million per day in January.

Daily deaths of around 200 are “tragic…but not out of proportion to other major health problems” such as auto accidents, said Dr. David Dowdy, associate professor of epidemiology at the Johns Hopkins Bloomberg School of Public Health.

With about 60% of U.S. adults fully vaccinated and a portion of the rest likely resistant from previous infection, “We should not be panicking,” he said.

Yet with many adults still susceptible, a national vaccine drive stalled, and children under 12 not yet approved for immunization, the last few weeks suggest the handoff to post-pandemic policy may remain bumpy.

Among the core assumptions behind current Fed thinking, for example, is that a full reopening of in-person schooling this fall will free parents to resume work – a process that could now falter and slow the hoped-for recovery of nearly 6.8 million missing jobs.

“There will certainly be parents who will push back against in-person attendance. Those same parents may be hesitant to return to offices,” wrote Northern Trust (NASDAQ:) Chief Economist Carl Tannenbaum. “Even if formal restrictions are not reintroduced, a heightened sense of risk among populations will create complications for commerce.”

A Centers for Disease Control collection of major epidemiological models shows forecasts between now and early August of anywhere from a few thousand cases per day to a massive outbreak rivaling last winter.

Wells Fargo’s Bryson said he is watching the United Kingdom, with vaccination rates similar to the United States and a large surge in recent infections, for signs of what may be coming.

There remains a large pool of household savings to keep the bills paid, socked away during the pandemic from an array of federal programs. Businesses meanwhile have adapted to operate more safely around the virus, with touchless QR code menus now omnipresent at restaurants, and web-based ordering systems further reducing staff interactions with customers.

But the ebb and flow of the disease will still need to be managed, and by the fall most of the pandemic support programs set up to help in that process will have ended, including additional federal unemployment insurance payments and a moratorium on rental evictions.

“This is not going away. It is going to be endemic,” with possible implications for policy if, for example, the restaurant or other industries end up with cyclical coronavirus slowdowns and a new seasonal pattern to employment, said Tim Duy, chief U.S. economist with SGH Macro Advisors. “The public health goal now is to make it a non-event.”