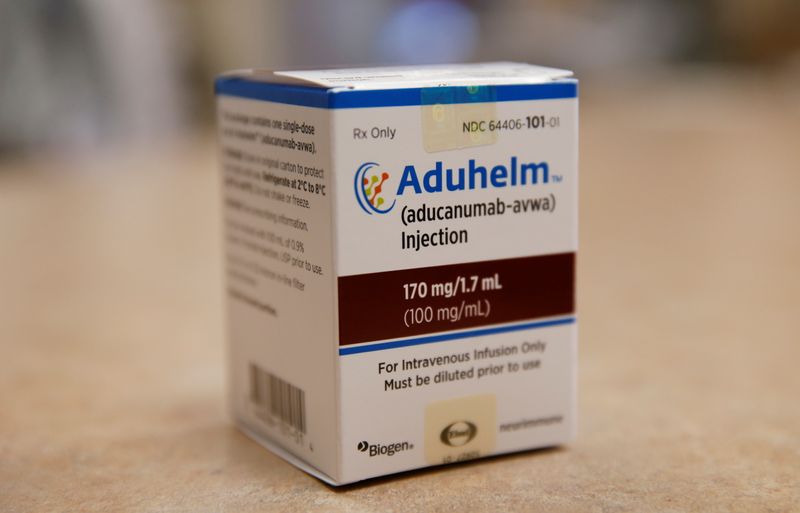 (Reuters) – U.S. hospitals that were expected to be early adopters of Biogen’s Alzheimer’s drug have treated only a handful of patients since its early June approval as they wait for the first payments from the government’s Medicare program for people aged 65 and older.

The U.S. Food and Drug Administration approved the drug, called Aduhelm, based on limited evidence that it might slow a decline in cognitive function in people with the memory-robbing disease.

Some prominent doctors, hospitals and health insurers have criticized the FDA decision and said they will not offer the drug. The agency itself has invited an outside investigation into its decision-making process.

Other leading institutions, including in Michigan, Florida and Rhode Island, were eager to make the therapy available to patients in the hope it will provide a benefit, but told Reuters this week they are proceeding slowly while Medicare determines how it will cover Aduhelm, initially priced at about $56,000 per year.

Medicare has launched a nine-month process to set standardized national terms for Aduhelm coverage that may seek to limit its use.

For now, the government health plan is processing claims for the drug on a case-by-case basis. The first centers to use the drug as a commercial product said those claims have not yet been paid.

“Medicare does this very, very rarely for drugs and issues these coverage restrictions, again, very rarely,” said Dr. Aaron Kesselheim of Brigham and Women’s Hospital during an online interview presented jointly by The Forum at the Harvard T.H. Chan School of Public Health and Reuters. Kesselheim resigned as a member of the FDA advisory panel that reviewed Biogen (NASDAQ:)’s drug after the agency chose not to follow it recommendation against approval.

The slow uptake raises questions about the potential for 2021 sales for the treatment ahead of Biogen’s second-quarter earnings report on Thursday.

The Michigan Institute for Neurological Disorders (MIND) said it has only treated one patient with Aduhelm.

Sonda Rossman, head of disease state initiatives, therapeutics, and clinical research at MIND, said the institute is testing more patients for Aduhelm eligibility, but is “being very cautious” about financial, as well as medical, risks.

Florida’s First Choice Neurology and Butler Hospital’s Memory and Aging Program in Providence, Rhode Island, have treated three patients each. Butler’s program is run by Dr. Steven Salloway, an Aduhelm supporter who has called the drug’s approval “a turning point in Alzheimer’s research.”

The Mayo Clinic, which has partnered with Biogen to provide clinical testing to diagnose whether someone is eligible for the new medication, said it is still reviewing whether to offer Aduhelm to its own patients.

The FDA approved Aduhelm for patients who test positive for a component of amyloid brain plaques, but later narrowed that to just those in the early stages of the disease – the group tested in clinical trials.

UCLA Health System said none of its providers have asked to use Aduhelm, with many awaiting additional data before making a final decision.

Biogen declined to comment on the number of centers using its drug, but said it expects the rollout to be gradual.

Because Alzheimer’s is an age-related disease, around 85% of people eligible for Aduhelm are covered by Medicare, which could incur a $29 billion annual spending increase, according to Kaiser Family Foundation.

Experts say Medicare could seek to lower the therapy’s cost to taxpayers by limiting access to the treatment, linking coverage to real-world evidence of patient outcomes, or setting a fixed payment that combines drug reimbursement with other costs related to the treatment.

“Given the potential budgetary impact, it could be that things are departing from normal,” said Dan Ollendorf, of the Center for the Evaluation of Value and Risk in Health at Tufts Medical Center in Boston.

Tufts and others have called for Medicare to go beyond a national coverage determination and institute a policy known as coverage with evidence development.

Under such a program, data on Aduhelm’s real-world effectiveness and safety would be compiled in a Medicare patient registry, quickly providing new data to analyze.

Medicare could also institute a stricter “demonstration project” for Aduhelm that would pay for the drug’s use at a limited number of medical centers and for a fixed amount that bundles in costs for scans, follow-up and to monitor for side effects.

While Medicare is prevented by law from negotiating drug prices, this type of approach could limit reimbursement to hospitals, possibly at an amount below Aduhelm’s list price. That could put pressure on Biogen to cut the price if it wants Aduhelm to be used, said Raymond James analyst Chris Meekins.