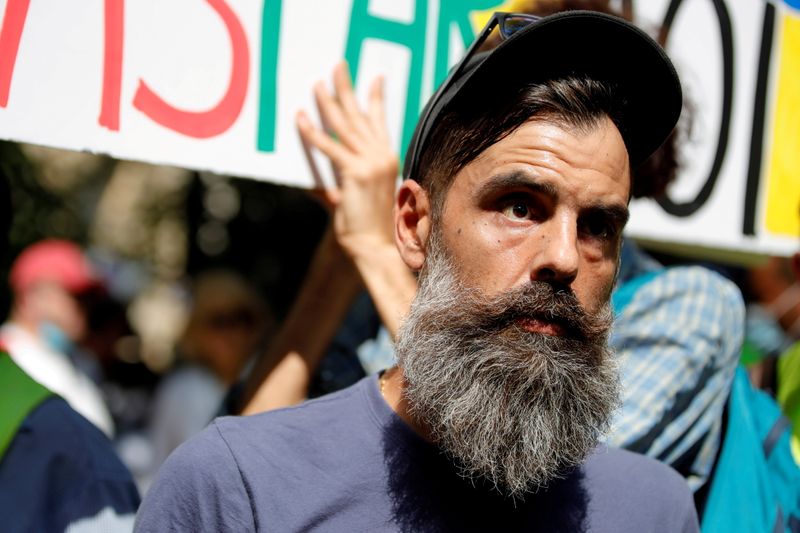 © Reuters. FILE PHOTO: Jerome Rodrigues, one of the yellow vest movement’s leading figures, attends an interview with Reuters beside a protest of the “yellow vests” movement, in Paris, France, July 21, 2021. REUTERS/Sarah Meyssonnier/File Photo

By Caroline Pailliez and Clotaire Achi

TREMBLAY-EN-FRANCE, France (Reuters) – Working from his one-room apartment near Paris airport, Jerome Rodrigues has been trying to re-invigorate a Yellow Vest protest movement that two years ago challenged President Emmanuel Macron’s rule then petered out.

Now, public anger at government measures to curb the spread of COVID-19, which some people say are an attack on their liberty, has given Rodrigues and his movement fresh momentum.

Last weekend, police estimated that 100,000 people joined protests against the measures – some of them under the banner of the Yellow Vests. Another round of protests is planned for this weekend.

An internal interior ministry report, seen by Reuters, described last week’s protests as “exceptional in their scale,” warned further large protests were likely, and said some officials associated with the government’s COVID-19 measures needed to be extra vigilant about their security.

Rodrigues, one of the movement’s best-known figures who lost an eye when he was hit with a projectile at a protest two years ago, said the latest protests had attracted people beyond the usual Yellow Vest faithful.

“I’ve seen a lot of first-time protesters,” Rodrigues, who wears a prosthetic eye, said at his apartment. “Healthcare workers, restaurant owners too, all kinds of people, children.”

“If there’s one thing that can unite people today, it’s anger.”

Macron’s administration has submitted legislation to parliament which will stop people entering restaurants and bars without a “health pass”, showing they are vaccinated, have had a recent negative test, or have immunity from COVID-19. Opponents say the state is, de facto, forcing people to get jabbed.

The Yellow Vests have to compete to lead the anti-health pass movement with other groups; among them far-right politicians, and civil liberties campaigners.

Macron’s allies say protests should not obscure what they say is a silent majority who support the measures, and believe they are needed to get life back to normal.

“Let’s keep it in perspective,” said Laetitia Avia, a member of parliament with Macron’s party. “There were around 100,000 people protesting across the country, while there are millions of people who got themselves vaccinated.”

Mohamed Boukifa, a 40-year-old baker, joined Rodrigues at a Yellow Vest demonstration in Paris on Wednesday against the health pass.

He said he had followed the Yellow Vests over social media, but until now had never joined a demonstration.

“I’m not here because I’m against the vaccine” he said. “I’m here to defend our freedoms. We cannot be forced to get vaccinated.” He said he had not had the jab, because he was worried about possible side effects.

The Yellow Vest movement started off in 2018 as a protest against taxes on diesel, then morphed into an outpouring of anger at high living costs and income inequality.

Yellow vests blocked roads and staged protest marches, often clashing with police. Billions of euros in tax cuts helped quell the uprising, and after six months it began to lose steam. Followers continued to protest, but in dwindling numbers.

The health pass protests have been mostly peaceful. But police used tear gas to disperse protests in Paris on July 14. Two vaccination centres were targeted in arson attacks. The speaker of the French parliament said some lawmakers who back the health pass received death threats.

None of those incidents have been linked to the Yellow Vests.

The interior ministry report seen by Reuters recommended extra security measures. “The longer the conflict goes on, the greater the risk that the most determined, and the most radical, will come in and take control of it,” the memo said.

Sproutly Announces Financial Results for the First Quarter of Fiscal 2022