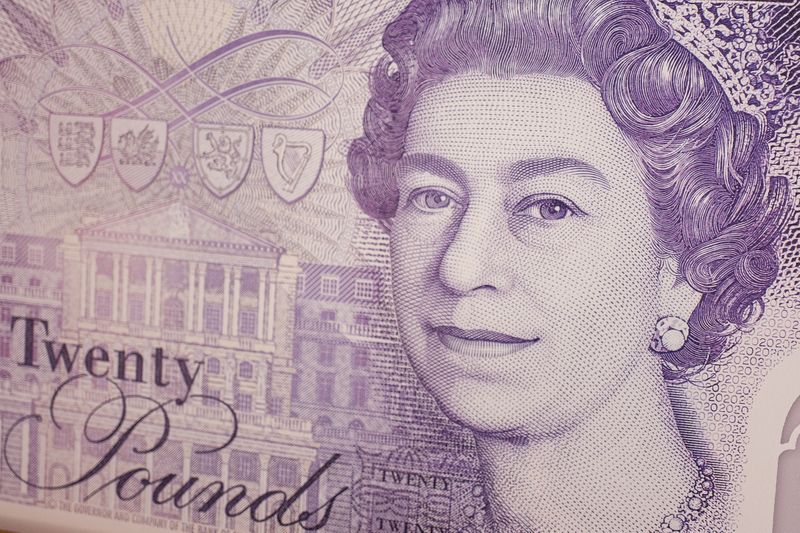 © Reuters. FILE PHOTO: Some of the artwork details are seen on a large scale sample of the new twenty pound note during the launch event at the Turner Contemporary gallery in Margate, Britain, October 10, 2019. Leon Neal/Pool via REUTERS

Public borrowing for the first three months of the financial year totalled 69.5 billion pounds, down more than 40% from the three months to June 2020, when Britain recorded its heaviest-ever borrowing in cash terms due to its COVID spending surge.

During the financial year to the end of March 2021, Britain’s budget deficit leapt to 14.2% of gross domestic product, its highest share of GDP since World War Two.

The Institute for Fiscal Studies, a think tank, said in a report with economists from Citi that borrowing in the 2021/22 financial year would drop to 9.3% of GDP. This is 30 billion pounds less than the government’s forecasters expected in March but would still be the third-highest on record.

Sunak’s support for furloughed workers and a tax break on property purchases are being phased out, while a temporary increase in the main benefit for the unemployed and low-earners will stop on Oct. 1. Overseas aid spending has also been cut.

Sunak is due to hold a review of government spending before the end of the year.

The IFS think tank said that although the short-run outlook for the public finances was better than in March – giving scope for one-off giveaways – the long-term prospects pointed to spending cuts for some government ministries unless taxes rise.