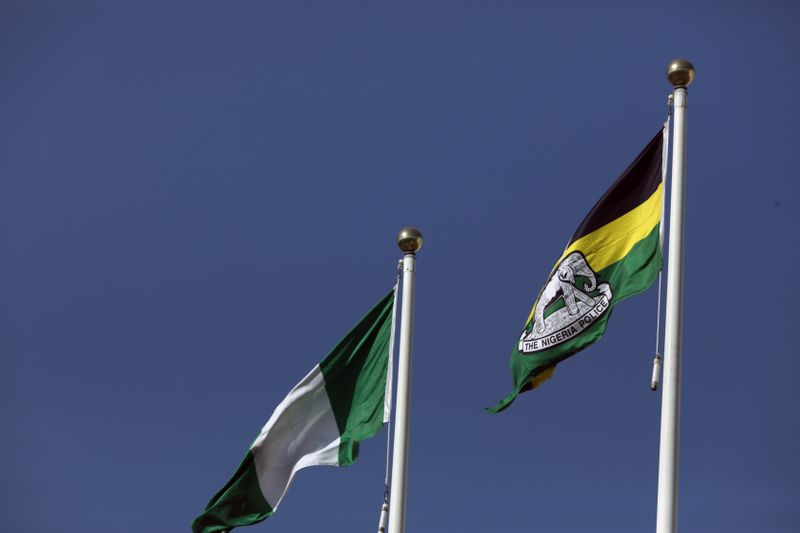 © Reuters. A flag of the Nigeria Police Force flies next to the Nigerian national flag at the Louis Edet House, headquarters of the police in Abuja, Nigeria December 5, 2017. REUTERS/Afolabi Sotunde – RC1748F58D00


LAGOS (Reuters) – Police and government authorities have secured the release of 100 people, including women, children and nursing mothers, who were kidnapped from their village in northwestern Nigeria over a month ago, a local police spokesperson said.

Nigeria is battling an increase in armed robberies and kidnappings for ransom, mainly in northwestern states, where thinly deployed security forces have struggled to contain the rise of armed gangs, commonly referred to as bandits.

The released captives had been abducted on June 8 from Manawa village in Zamfara state, Mohammed Shehu, the state’s police spokesperson, said in a statement sent to Reuters on Wednesday.

He said their release had been secured “without giving any financial or material gain.”

“They will be medically checked and debriefed before (being) reunited with their respective families,” the statement added.

While northeastern Nigeria has faced a decade of insecurity, including attacks by Islamist militants including Islamic State-allied Boko Haram, the current wave of kidnappings is primarily financially motivated.

The bulk of those were abducted in the northern states of Zamfara, Kaduna and Niger. SBM said it could not accurately assess how much has been paid in ransoms.

Over 200 students as well as scores of others taken in kidnapping raids are still being held captive.

it needs more warehouses By Reuters

3 Must-Own Healthcare Stocks for Your Portfolio By StockNews

Which Cybersecurity Stock is a Better Buy? By StockNews