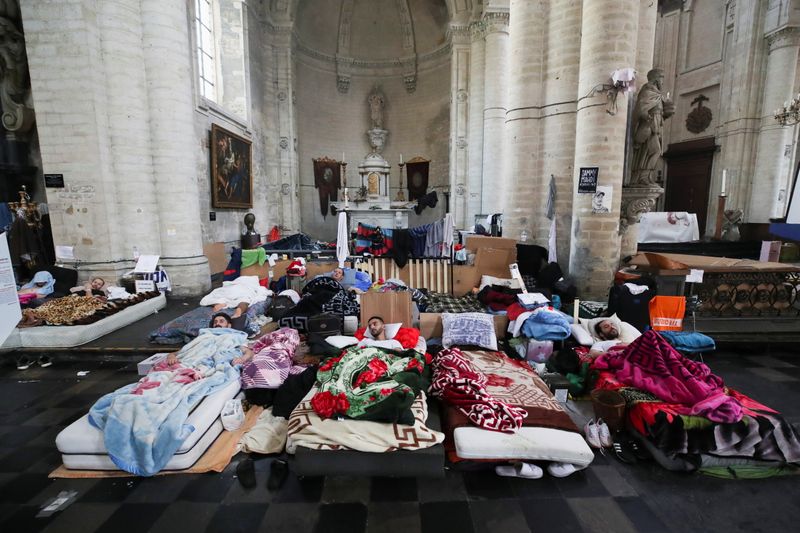 © Reuters. Asylum seekers who are among several hundred migrants requesting to be regularised by the Belgian government to have access to healthcare, take part in a hunger strike for more than 7 weeks while dozens started a thirst strike on July 16, at the Saint-Jea

BRUSSELS (Reuters) – Hundreds of undocumented immigrants, on hunger strike in Brussels for the last two months to demand residence rights, have begun refusing water, putting themselves close to death and the Belgian government in danger of collapse.

Around 400 migrants, many of whom have been in Belgium for years, are already emaciated after refusing food since May 23, and three-quarters of them decided on Friday to stop receiving water or saline drips.

The medical charity that has been caring for them at two universities and a church, Medecins Sans Frontieres (MSF), said they could die within days. It said many had lost hope and were having suicidal thoughts.

Prime Minister Alexander de Croo has refused to make any exception from normal asylum and immigration procedures for the hunger strikers.

But two of the seven coalition parties, the Socialists and the Greens, say he is being too inflexible and legalistic. They say that if any die, they will quit the coalition, leaving the government unable to survive.

The migrants are mostly from South Asia and North Africa, and some have been in Belgium for more than a decade.

Although they have managed to make a living, they have suffered disproportionately from the coronavirus lockdowns that have forced many cafes, restaurants and other businesses to close, and been unable to claim relief payments because of their undocumented status.

Sammy Mahdi, a junior minister for asylum and migration, has appointed a mediator, and designated a place where migrants can go to get information about their rights and how to obtain official status.

“We’re not going to conduct a separate policy for people who go on strike or occupy premises,” Mahdi said.

“There are 150,000 undocumented migrants in our country and it wouldn’t be right to treat 400 people differently.”