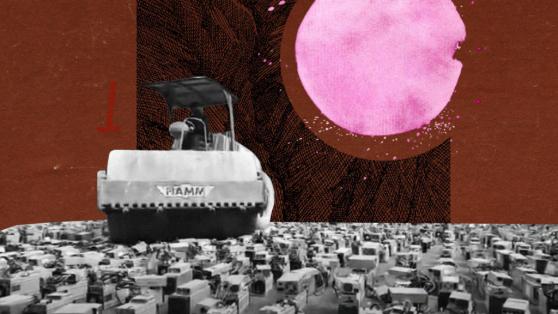 
The crackdown on cryptocurrencies is overwhelming much of the media space as market sentiment remains below the threshold of 25 on the Fear and Greed Index. The price of Bitcoin is descending without much volume and positive momentum to gather it back up. Cryptocurrencies exist because of blockchain, and while the interlink is rarely discussed, blockchain still holds intrinsic value for any entity or country vested in it. Expanding on the subject of crypto becomes more restrictive as countries that curbed crypto’s growth continue to enforce stricter rules.

Malaysia Has No Love For “Dirty” Bitcoin

In a new video release, Malaysian police are reportedly crushing 1,069 ASIC miners using a steamroller. The market value of the digital-gold digging machines amounts to $1.25 million after authorities seized them during an electricity theft investigation.

A Malaysian news outlet report indicates that the ASIC miners dispatched occurred in the city of Miri in the Malaysian province of Sarawak state. The seizure of 1,069 miners results from an electricity theft investigation between February and April 2021, where eight individuals were arrested. Furthermore, the report stated, “All seizures made in the cases that had been settled in court were disposed of.” As one Twitter user highlighted, ASIC miners could not have been repurposed because they do not have a GPU.

The March theft incurred electricity losses amounting to $2.2 million, with multiple reports stating the behavior was recurring in the country. According to Cambridge Bitcoin Electricity Map data, Malaysia accounts for 3.4% of the global hashrate as of April 2021. While digital assets are not legal tenders in Malaysia, cryptocurrencies are not illegal; however, they are unregulated.

China’s disassociation with cryptocurrencies pushed most of the Chinese mining operations to Kazakhstan. According to a report, 90% of the total electricity produced is fossil-fueled. However, restrictions on mining and cryptocurrency transactions are not the only ways China is affecting crypto dispersion.

Reports highlight China has increased its control of cryptocurrencies, as Bishijie, a social network for discussing and distributing information about cryptocurrencies, has been forced to shut down. In addition, media reports emphasize that Bishijie or Coin World is already being investigated for issuing illegal digital assets in 2019.

Bishijie app was already removed from the app store, according to Jiemian News; however, the company is still updating BTC-related news. Moreover, with stricter rules towards cryptocurrencies, China aims to regain control of a sector that could imperil its political status by allowing digital anonymity to gather momentum.

Cryptocurrencies and blockchain could not exist without one another. While scrutiny increases towards the former, blockchain increases in influence as a new digital epoch beckons. Blockchain is already leveraged in multiple digital sectors, such as AWS’s cloud computing. More so, China has engaged in testing digital currencies with the release of their e-yuan CBDC.

China has been piloting the transition towards digital currencies since 2014. Real-world trials are underway with “red envelopes” distributed in metropoles such as Beijing, Chengdu, and Shenzhen to analyze spending behaviors. As cryptocurrencies become excluded from Chinese society, China aims to “control and administer the payments industry directly.”

In contrast, despite the Chinese mining exodus and the enforcement of stricter regulations on using cryptocurrencies, crypto devotees still have avenues to challenge CBDC’s hegemony through something called privacy coins. Although their status is somewhat illegal, governments can only limit their use to a certain extent.