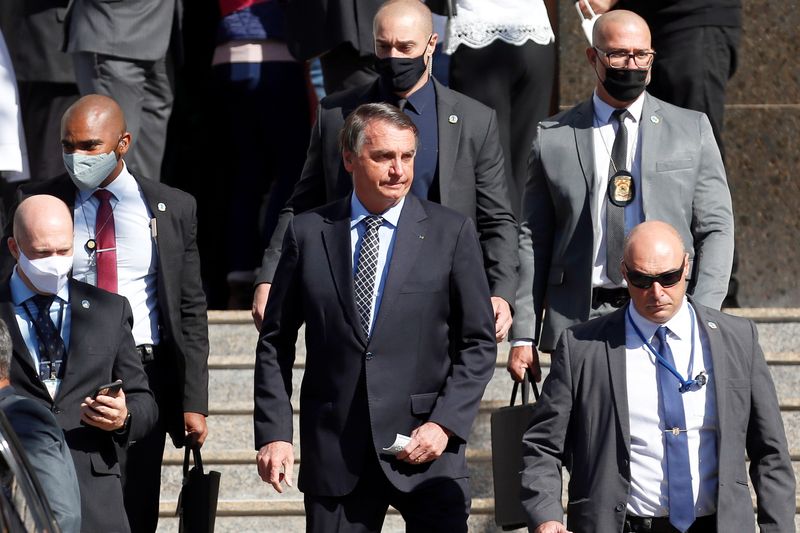 
BRASILIA (Reuters) -Brazil’s President Jair Bolsonaro said on Wednesday he is planning a ministerial shakeup next week, as the weakened far-right leader seeks to shore up power by appeasing an influential force in Congress with which he is increasingly allied.

Speaking in a radio interview, Bolsonaro did not provide details of his planned Monday reshuffle, but two sources familiar with the matter told Reuters he is considering changing his chief of staff and the presidential secretary general.

The Ministry of Labor, which was merged with the Economy Ministry by Bolsonaro, could also be recreated, the sources said. Onyx Lorenzoni, currently secretary general of the presidency, is likely to head it, they said.

Bolsonaro increasingly appears to be looking to please the so-called “centrao,” an ideologically flexible bloc of lawmakers whose congressional support has been crucial to staving off the dozens of impeachment proceedings the president faces.

Bolsonaro has been further weakened by a sharp fall in popularity as criticism of his management of the COVID-19 pandemic mounts. Brazil, with nearly 550,000 dead, has the second-highest death toll after the United States.

He is also facing a simmering corruption scandal over his government’s procurement of vaccines, which is being probed by a Senate committee.

Blockfolio rides off into the sunset, but it’s a new dawn for FTX App By Cointelegraph