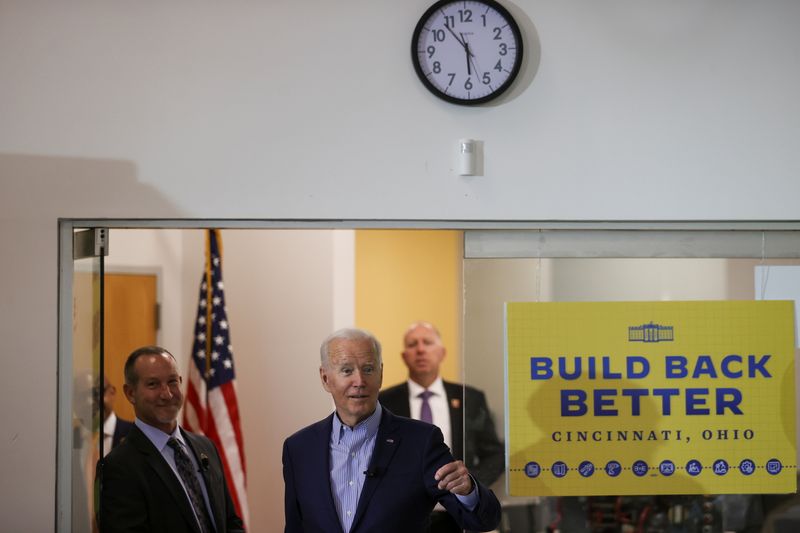 
CINCINNATI (Reuters) – President Joe Biden will take questions in a town-hall format on Wednesday night in a Republican-supporting part of Ohio, as rising COVID-19 cases threaten to undermine the country’s economic rebound after the pandemic.

White House officials said the event, in a part of Cincinnati that voted strongly for Republican former President Donald Trump last November, would give Biden, a Democrat, a chance to reflect on his first six months in office and appeal directly to Americans to get vaccinated.

Biden’s town hall, which will be broadcast on CNN starting at 8 p.m., marks his third visit to the state as COVID-19 cases rise amid a deadly variant, and the White House’s vaccination efforts have stalled amid waves of disinformation and skepticism.

Pent-up demand combined with supply-side challenges has pushed up prices for consumer goods, leading to concerns over inflation. The fate of a $1.2 trillion bipartisan infrastructure deal, one of the president’s top priorities, is also uncertain in Congress where Democrats hold slim majorities.

The Cincinnati event gives Biden, sometimes criticized for his wooden delivery when reading remarks from a teleprompter, a chance to speak directly to Americans about his economic proposals and to try to persuade the unvaccinated to get shots.

He will highlight his plans to replace aging and dangerous infrastructure, a topic that resonates heavily in Cincinnati, where the Spence Bridge is often shut to traffic.

Experts say the bridge has been rated as “functionally obsolete” by federal standards since the 1990s, and often carries up to twice as many vehicles as it was designed for.

Biden expressed optimism that Congress would move forward with the bipartisan infrastructure package during a stop at a union training facility in Cincinnati before the town hall.

“Yes, we will,” Biden said when asked if he would get an infrastructure deal.