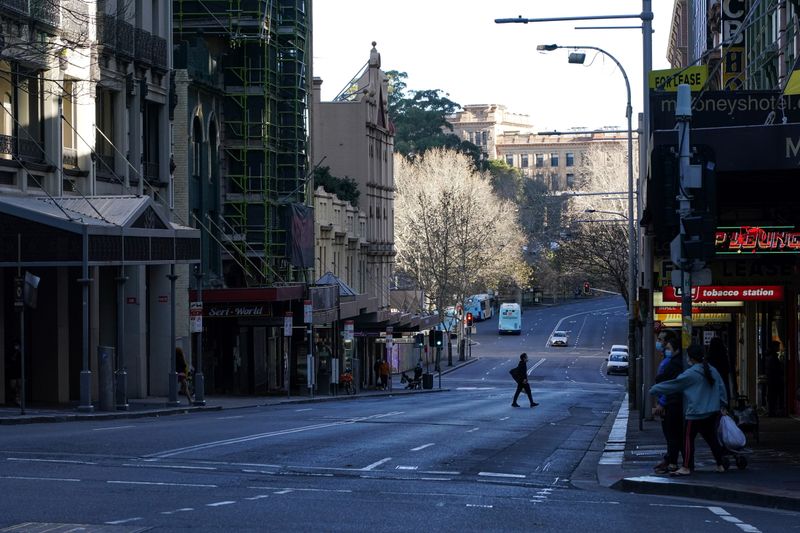 © Reuters. A pedestrian crosses an almost empty street in the City Centre during a lockdown to curb the spread of the coronavirus disease (COVID-19) outbreak in Sydney, Australia, July 21, 2021. REUTERS/Loren Elliott


By Renju Jose and Byron Kaye

SYDNEY (Reuters) -Coronavirus cases in Australia spiked again on Thursday, despite a weeks-long lockdown, with authorities warning that infections would rise more and take a toll on the economy as the country battles to contain the highly contagious Delta variant.

New South Wales (NSW), Australia’s most populous state, reported 124 new COVID-19 cases, versus 110 a day ago. Most cases were in state capital Sydney which is in its fourth week of a lockdown. Victoria state, entering a second week of stay-at-home orders, logged 26 new cases, up from 22.

“We anticipate case numbers will continue to go up before they start coming down and we need to brace ourselves for that,” said Gladys Berejiklian, premier of NSW.

Of most concern is the number of people moving around in the community before being diagnosed, which was 48 on Wednesday in NSW, the state’s health authorities say.

Sydney, home to a fifth of Australia’s 25 million people, was due to exit lockdown on July 30 but Berejiklian has said the number of infections in the community must be near zero first.

She urged people to get vaccinated.

“Until we have enough of our population fully vaccinated, we will be living with some level of restriction and that will depend on how quickly we can overcome the severity of the current outbreak,” she said.

“The vaccine is key to our freedom.”

Neighbouring Queensland state closed its border to NSW, citing the outbreak, shutting off one of the most travelled routes in the country.

In Victoria, to the south of NSW, all the 26 new cases were linked to known chains of transmission and 24 were in quarantine throughout their infectious period, the state authorities said.

South Australia state was bracing for more cases on Thursday as officials track two “superspread events” – gatherings at a winery and a Greek restaurant in the state capital Adelaide.

Five of six cases in South Australia reported late on Wednesday were linked to the winery.

With large swathes of businesses shut down in the country’s two largest cities, Australia’s A$2 trillion ($1.5 trillion) economy could take a big hit from the latest lockdowns that has forced more than half its population indoors.

The economy had boomed to pre-pandemic levels in the early months of this year https://www.reuters.com/world/asia-pacific/australia-gdp-climbs-18-q1-back-pre-pandemic-time-2021-06-02 thanks to low COVID-19 cases.

But the latest lockdowns could cost the national economy around A$300 million ($220 million) a day, Federal Treasurer Josh Frydenberg estimated.

“It’s going to have a hit on the economy. We’ll see that in the future jobs data as well as in the GDP growth numbers,” Frydenberg told the Australian Broadcasting Corp.

The country’s main airline, Qantas Airways, said in a memo to staff that domestic capacity had fallen below 40% of pre-COVID levels and that staff may be stood down without pay if lockdowns continued for “extended periods”.

Australia has fared better than many other developed economies in keeping infections relatively low, with some 32,200 cases and 915 deaths. But with a sputtering immunisation campaign, just 11% of the population fully vaccinated, it has relied on lockdowns and border closures to contain the outbreak.