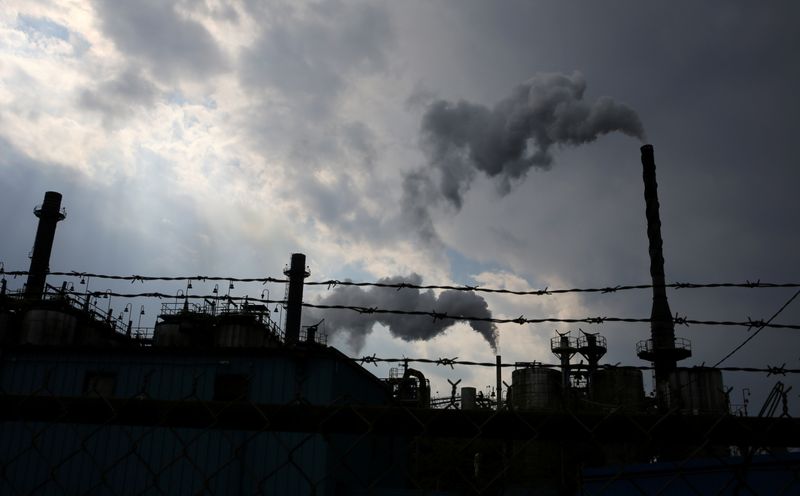 © Reuters. FILE PHOTO: Steam rises from a chemical plant in an industrial zone in Hamilton, Ontario, Canada May 13, 2017. REUTERS/Chris Helgren

LONDON (Reuters) – The COVID-19 pandemic is accelerating a shift by central banks and sovereign wealth and public pension funds to greener and more activist investment strategies, one of the largest annual surveys of their behaviours showed.

The Global Public Investor survey by think-tank Official Monetary and Financial Institutions Forum (OMFIF) sampled 102 institutions overseeing a combined $7 trillion this year to track how the pandemic and other long-term trends are affecting them.

The findings of the survey, seen by Reuters ahead of its publication on Wednesday, showed the scale and speed at which environmental, social and governance (ESG) factors were now driving investment decisions.

“There has definitely been an acceleration due to COVID,” OMFIF’s Chief Economist Danae Kyriakopoulou said.

“At the beginning (of the pandemic), we thought there would be a focus on the short-term, the quick boosts to recoveries. But actually there has been this realisation that our financial systems are so vulnerable to things outside the financial world”.

As well as a store of wealth for future generations, sovereign wealth funds are often used by countries during periods of upheaval.

For the first time since OMFIF started asking about ESG, the majority in all three categories of global public investors (GPIs) said that they now implement it in some way.

This differed widely between types of institution, with all pension funds implementing ESG criteria, compared with around two-thirds of sovereign funds and just over half of central banks.

Central banks made up around 60% of OMFIF’s survey sample this year and while many don’t invest in equities or infrastructure projects, green bonds remain their most popular ESG option.

Over a third of the banks asked in the survey now hold them, although some also said that liquidity and lack of supply of green bonds, especially in dollars, can be a headache.

The survey also showed a trend for more active ownership, especially among sovereign wealth and public pension funds. Rather than just excluding polluters, many funds are now specifically buying companies or projects that transition to more sustainable practices from dirtier or less responsible ones.

There are still clear gaps though. The survey found that around 60% of GPIs didn’t use ESG benchmarks – a kind of shopping list of assets that they can and can’t own – and only 8% had their own bespoke benchmarks.

An Invesco survey earlier this month found the majority of sovereign funds think financial markets are fully pricing in the long-term implications of climate change.

“Policy-makers and investors should not be surprised by such rulings or decisions. Even though they are radical and mark a ‘tipping point’, it is clear that momentum for change has been building”.

Graphic: How activist are central banks and wealth funds – https://fingfx.thomsonreuters.com/gfx/mkt/znpneddqrvl/Pasted%20image%201626789998482.png