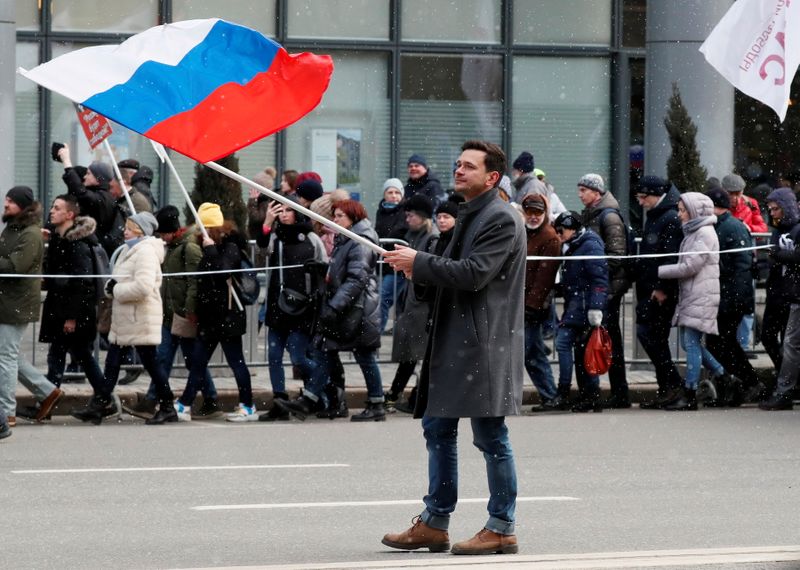 © Reuters. FILE PHOTO: Russian opposition figure Ilya Yashin waves a national flag during a rally to mark the 5th anniversary of opposition politician Boris Nemtsov’s murder and to protest against proposed amendments to the country’s constitution, in Moscow, Russia


MOSCOW (Reuters) – A Russian opposition politician said on Friday he had been barred from taking part in a local election because of his support for jailed Kremlin critic Alexei Navalny.

Ilya Yashin said he had wanted to register as a candidate for an election to the Moscow City Duma, the regional parliament, but was told he could not under a law banning members of groups declared “extremist” from running for office.

A court ruling this month outlawed groups linked to Navalny as “extremist”, and a new law prevents heads or members of such groups from running for the lower house of parliament or taking part in other elections for periods of three to five years.

Yashin often takes part in opposition street protests but is not part of Navalny’s team.

“I’ve been barred from elections,” Yashin wrote on Twitter. “The electoral committee declared me extremist for my support of Navalny and barred me from running.”

Yashin said he would appeal the decision but did not expect it to be overturned.

“A political decision has been made not to let me run again in any elections,” he wrote in a separate Facebook (NASDAQ:) post.

Local authorities did not immediately comment on Yashin’s remarks.

Navalny is serving 2-1/2 years in jail on embezzlement charges he says are trumped up.

His allies have accused the authorities of using the new law to crush opposition to the ruling United Russia party before a parliamentary election in September.

The law has already prompted Navalny ally Lyubov Sobol to abandon her campaign for a parliamentary seat.

Opinion polls suggest President Vladimir Putin remains popular in Russia and that support for Navalny and his allies, who are given little air time on television, may be limited outside the big Russian cities.

France stocks higher at close of trade; CAC 40 up 1.35% By Investing.com