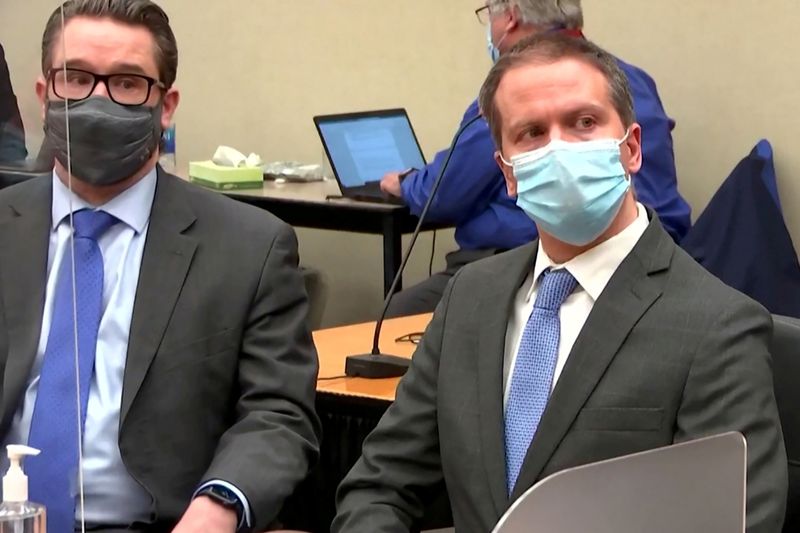 © Reuters. FILE PHOTO: Former Minneapolis police officer Derek Chauvin sits with his defense attorney Eric Nelson as the jury verdict is read, finding him guilty of all charges in his trial for second-degree murder, third-degree murder and second-degree manslaughter

(Reuters) – Former Minneapolis policeman Derek Chauvin will be sentenced on Friday for murdering George Floyd in May 2020 after a trial that was widely seen as a watershed moment in the history of U.S. policing.

The defense has asked for probation and has sought a retrial ahead of an expected appeal. Chauvin’s lawyer has argued that he was deprived of a fair trial because of prosecutorial and jury misconduct and errors of law at trial.

Video of Chauvin, who is white, kneeling on the neck of Floyd, a 46-year-old Black man in handcuffs, for more than nine minutes sparked outrage around the world and the largest protest movement seen in the United States in decades.

In a sentencing memorandum, prosecutors from the Minnesota attorney general’s office wrote that Chauvin’s crime “shocked the conscience of the Nation.”

In a six-page ruling last month, Cahill found that prosecutors had shown there were four aggravating factors https://www.reuters.com/world/us/minnesota-judge-rules-aggravated-factors-george-floyd-murder-2021-05-12 that would allow him to hand down a longer prison term than sentencing guidelines would dictate. The judge agreed that Chauvin abused his position of trust and authority; that he treated Floyd with particular cruelty; that he committed the crime as part of a group with three other officers; and that he committed the murder in front of children.

Through his attorney Eric Nelson, Chauvin has asked the judge to sentence him to probation, writing that the murder of Floyd was “best described as an error made in good faith.”

Chauvin was helping arrest Floyd on suspicion of using a fake $20 bill.

Prosecutors may call on Floyd’s relatives to talk about the impact of his death during the Friday afternoon hearing in a Minneapolis courtroom. Chauvin, who chose not to testify at his trial, has a right to address the judge before he is sentenced.

Mary Moriarty, Hennepin County’s former chief public defender, said in an interview that the judge may take note that Chauvin did not express remorse in the sentencing memorandum submitted this month by his lawyer.

“I think what Cahill would have been looking for from Chauvin or through his defense counsel is some responsibility for his actions or some empathy for George Floyd,” she said.

Chauvin has been held at the state’s maximum security prison in Oak Park Heights since his conviction.

In 2019, the former Minneapolis police officer Mohamed Noor was sentenced by a different judge to 12-1/2 years in prison after he was found guilty of third-degree murder and second-degree manslaughter for fatally shooting an Australian American woman, Justine Damond.

The three other police officers involved in Floyd’s arrest were, like Chauvin, fired the day after. The three are due to face trial next year on charges of aiding and abetting Floyd’s murder.