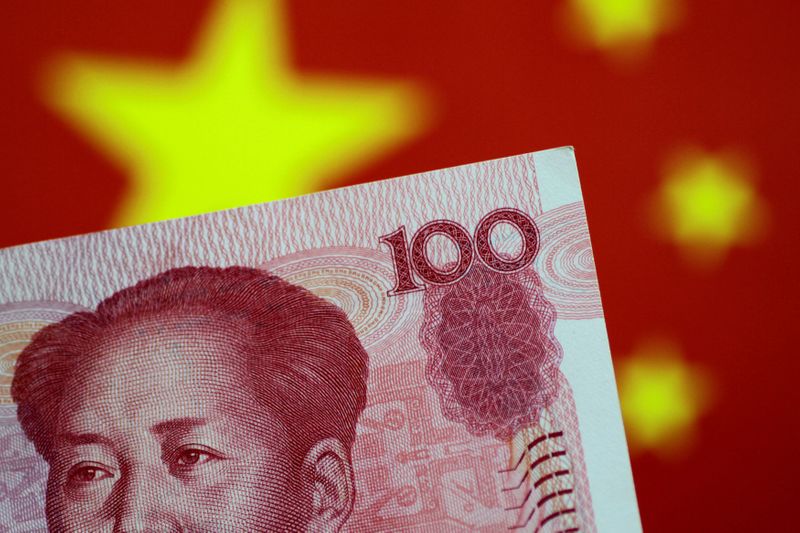 
By Winni Zhou and Andrew Galbraith

SHANGHAI (Reuters) – China’s financial regulators are cajoling companies to protect themselves against currency risks as the central bank gradually loosens its reins on the yuan, but are struggling to convince local businesses to hedge.

Senior regulators have used every public occasion to stress the importance of being “risk-neutral” in the foreign exchange market, and also forced commercial banks to conduct lessons on currency hedging and disseminate messages on social media.

But the People’s Bank of China (PBOC) and state regulators have had limited success even as authorities step back from heavily managing the yuan and prepare to allow more money to flow in and out of mainland markets.

The past year has vindicated that approach. The yuan had strengthened about 12% against the U.S. dollar between May 2020 and May 2021, touching its strongest level in three years, before pulling back in recent weeks.

Most importers are prepared to stomach some volatility as they bet that China’s high growth trajectory and attraction as an investment destination will sustain the yuan’s uptrend.

Pan Gongsheng, head of the State Administration of Foreign Exchange (SAFE), told a financial forum this month: “Don’t bet on appreciation or depreciation in the yuan. (People who) always gamble will definitely lose.”

Several such rounds of regulatory pitches have barely paid off. The number of Chinese non-financial listed A-share firms using FX hedging tools to counter market risks rose to 592 as of early June from 519 at the end of 2020, risk-management consultancy D-Union estimated. There are about 4,400 publicly traded companies in China.

The coronavirus pandemic has also disincentivised exporters, as shifting and delayed payments made it difficult to hedge by booking a contract to sell the future dollar receipts.

“A lot of exporters got hit, predominantly from the U.S… where the U.S. companies didn’t pay their bills on time,” said Gerhard Flatz, managing director of KTC Group, a manufacturer of performance outerwear, in Guangzhou.

“Can you imagine, you start hedging, you have your contracts mature and you don’t have the money to basically pay back? For the exporters, it’s extremely difficult to hedge when they have no assurance if the payment is really coming in.”

Many also did not want to hedge – which would involve locking in a future conversion rate – preferring instead to bet that the Federal Reserve’s taper from ultra-loose monetary policy will drive the dollar up and the yuan down.

The pile of dollars that domestic companies have accumulated has grown. Chinese banks had on their books more than $1 trillion of foreign exchange deposits by May, including $491.6 billion from domestic companies.

Bill Deng, CEO of cross-border payment company XTransfer, said currency hedging instruments such as options and futures may also be deemed too costly and complex by smaller Chinese exporters. XTransfer provides yuan forwards, which are vanilla hedging tools, to clients, but “even so, clients ask very basic questions, and you need constant education,” said Deng.

A source at a major Chinese state bank, who has delivered a series of lectures to corporate clients this year, said authorities aim to stabilise profits and employment at smaller firms. Small firms, including many exporters, account for about 80% of urban employment, according to government data.

Guan Tao, a former senior official at the foreign exchange regulator, also said recently that one-way bets on a rising yuan could hit smaller exporters, causing them to shut down and resulting in job losses.

“I don’t think regulators are afraid of something. As long as there is no systemic risk, it should be fine,” he said.