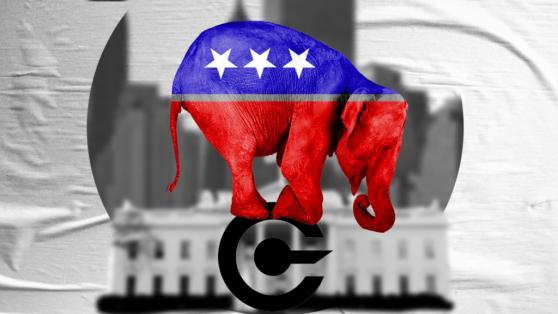 
According to media reports, the National Republican Congressional Committee (NRCC) will begin accepting political contributions in the form of cryptocurrencies – becoming the first major national party in the world to take this step. As first reported by Axios, the NRCC plans to use BitPay as the processing clearinghouse of digital donations going forward.

With BitPay as an intermediary, the crypto-funds will be converted into U.S. dollars, which will then be transferred to the NRCC coffers.

While there was no official statement or press release of the shift to accept digital currency contributions on its website, the NRCC Twitter handle did post this GIF along with a retweet of a link to the Axios story on Wednesday, June 16th.

NRCC Chairman and Congressman from Minnesota, Tom Emmers, made the push toward accepting crypto contributions for the conservative group. During his 2020 reelection effort, Emmers announced last summer that his campaign would also rely on BitPay to process donations in its supported cryptocurrencies.

While novel in its approach, neither the NRCC nor Emmers were the first politicos to accept cryptos. Back in 2015, Senator Rand Paul from Kentucky accepted Bitcoin as part of his failed bid for the White House. And during last year’s election, both Democrat congressional candidates Andrew Yang and Eric Salwell of California also accepted cryptocurrency donations during their presidential campaigns.

Hey you! Got 42 seconds? Please answer our short questionnaire, and help us to understand you better!

Germany stocks higher at close of trade; DAX up 1.00% By Investing.com