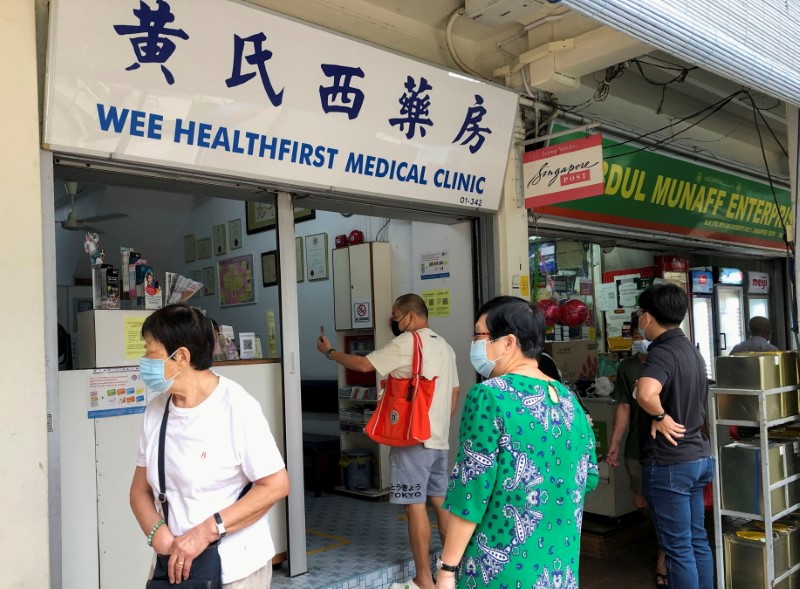 © Reuters. People queue to enquire about Sinovac vaccine at a clinic, during the coronavirus disease (COVID-19) outbreak in Singapore June 18, 2021. REUTERS/Chen Lin

By Chen Lin and Aradhana Aravindan

Singapore has vaccinated almost half its 5.7 million population with at least one dose of the vaccines from Pfizer-BioNTech and Moderna (NASDAQ:).

Both have shown efficacy rates of well over 90% against symptomatic disease in clinical trials, compared with Sinovac’s 51%.

Earlier this week, officials in neighbouring Indonesia warned that more than 350 medical workers have caught COVID-19 despite being vaccinated with Sinovac and dozens have been hospitalised, raising concerns about its efficacy against more infectious variants.

A number of the people rushing for the Sinovac shot on the first day of its availability in Singapore were Chinese nationals, who felt it would make it easier to travel home without going through quarantine.

Singapore allowed the usage of the Sinovac vaccine by private healthcare institutions under a special access route, following an emergency use approval by the World Health Organization (WHO) earlier this month.

Ong Ye Kung, Singapore’s health minister, said on Friday the government is still awaiting critical data from Sinovac before including it in the national vaccination programme.

Wee Healthfirst, another approved clinic, put a notice at its entrance on Friday, saying it had stopped reservations for the vaccine until next Thursday, citing “overwhelming demand”. A receptionist said about 1,000 people had registered there.

Leong Hoe Nam, an infectious diseases doctor at Rophi Clinic, also said he had been “overwhelmed” by people wanting the Sinovac shot.

Tang Guang Yu, a 49-year-old engineer, was among the Chinese nationals resident in Singapore who waited for the Sinovac shot rather than take a foreign-made vaccine that he thought might not be recognised by authorities back home.

“No one wants to be quarantined for a month, I don’t have so many days of leave,” Tang told Reuters as he queued outside a clinic.

Travellers to China may have to be quarantined at a facility and at home for up to a month depending on their destination city, regardless of vaccination status, according to the Chinese government website.

Other people said they have more confidence in the Sinovac vaccine since it is based on conventional technology, while those developed by Pfizer/BioNTech and Moderna use a newly developed messenger RNA platform.

“The mRNA technology has been around for 30 years, but it has never been injected into human until recently due to COVID-19 emergency, how safe it is?” asked Singaporean Chua Kwang Hwee, 62, as he lined up outside a clinic to enquire about getting the Sinovac shot.

Singapore’s health ministry says persons with a history of allergic reaction or anaphylaxis to mRNA COVID-19 vaccine or its components as well as severely immunocompromised individuals should not receive the mRNA-based vaccines.

Sinovac vaccine uses an inactivated or killed virus that cannot replicate in human cells to trigger an immune response.

Authorities have rejected these claims, saying they are safe and highly effective.